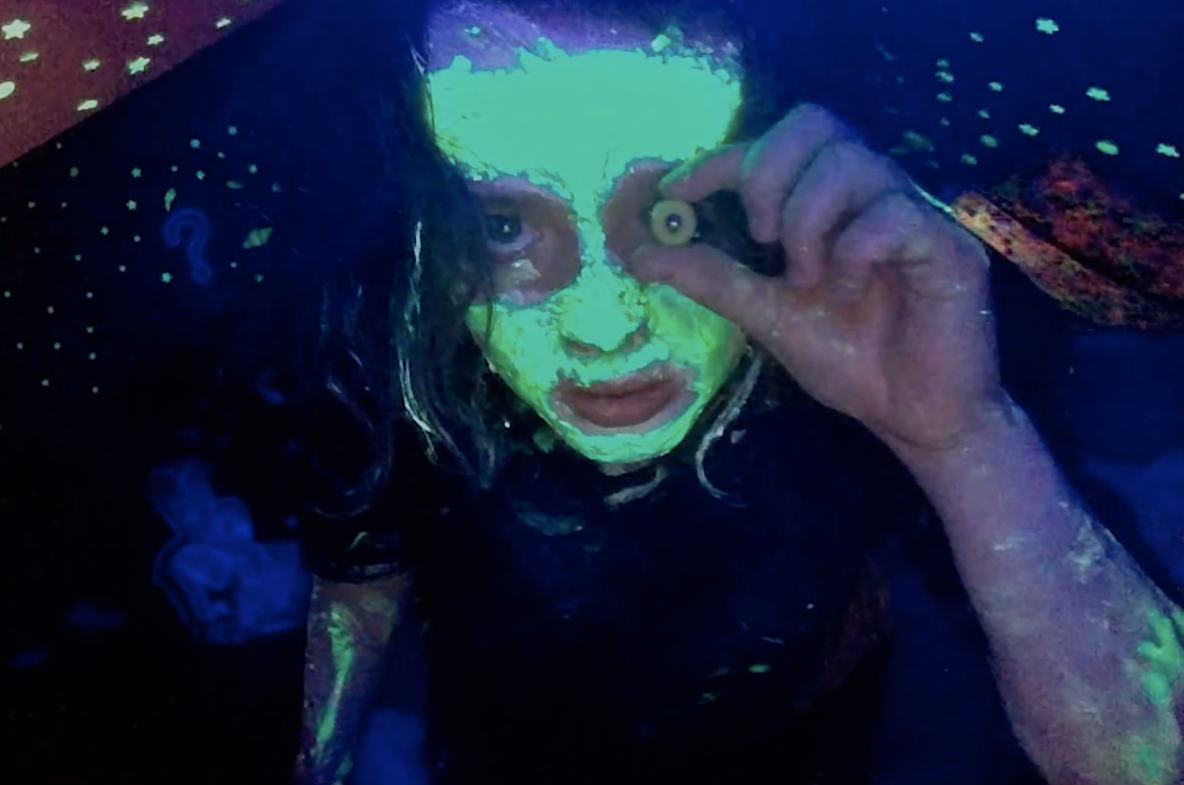 Despite appearances, We’re All Going to the World’s Fair isn’t actually a horror movie—and that may be its greatest strength. Instead, it’s a coming-of-age drama that borrows from horror movie tropes and aesthetics to create a deeply unsettling, disorienting, and emotionally troubling viewing experience. Told through unedited webcam vlogs, shaky handheld footage, and shots purposefully held either too far or too close to their subjects for comfort, We’re All Going to the World’s Fair uses horror and online community as lenses to meditate on loneliness, dissatisfaction, escapist fantasy, and transformation.

We’re All Going to the World’s Fair follows loner teen Casey (Anna Cobb) as she participates in the World’s Fair Challenge, a YouTube challenge purported to cause horrific bodily transformation through supernatural (and mostly unexplained) means. As she records and posts vlogs to track her progress, she develops a friendship with another World’s Fair participant, an older man named JLB (Michael J. Rogers) who attempts to offer advice and comfort as her behavior grows more erratic.

The film is somewhat unmoored in digital time, with prominent references to ASMR, YouTube, and Skype (placing it fairly solidly in a pre-COVID, pre-Zoom era). The latest timestamped video shown within the film shows a 2019 date, but the ethos of the film harkens back to the not-so-ancient days of YouTube video responses (which were phased out in 2013), when social media sites were more conducive to developing small, anonymous pocket communities.

Indeed, the film may owe far more to creepypasta as a genre than it does to the traditional horror movie.

The film is perhaps best considered, then, within the context of the 2012–2015 online era, where the MMORPG, the ARG, and creepypasta reigned, especially in conjunction with one another: the Slenderman mythos (particularly the Marble Hornets web series/ARG); the SCP Foundation, an immersive and collaborative horror/sci-fi writing project; even Homestuck, the multimedia webcomic originally centered around an apocalypse instigated by a computer game which zagged between genres (including horror, sci-fi, and fantasy) and garnered its own massive fandom with a major interactive/RPG component.

Indeed, the film may owe far more to creepypasta as a genre than it does to the traditional horror movie. There’s a real sense of quiet to this film, of the blank space on a page—much more than just the quiet that precedes a jump scare, the calm before the storm. There’s no real storm here. Just an endless, uncomfortable churning. Just when you think you might get some lore, you don’t; just when you think something supernatural is coming, or even just an act of horrific violence between regular people, it isn’t. It’s a story made scarier—both in the monstrous sense and the adult fear sense—through absence. 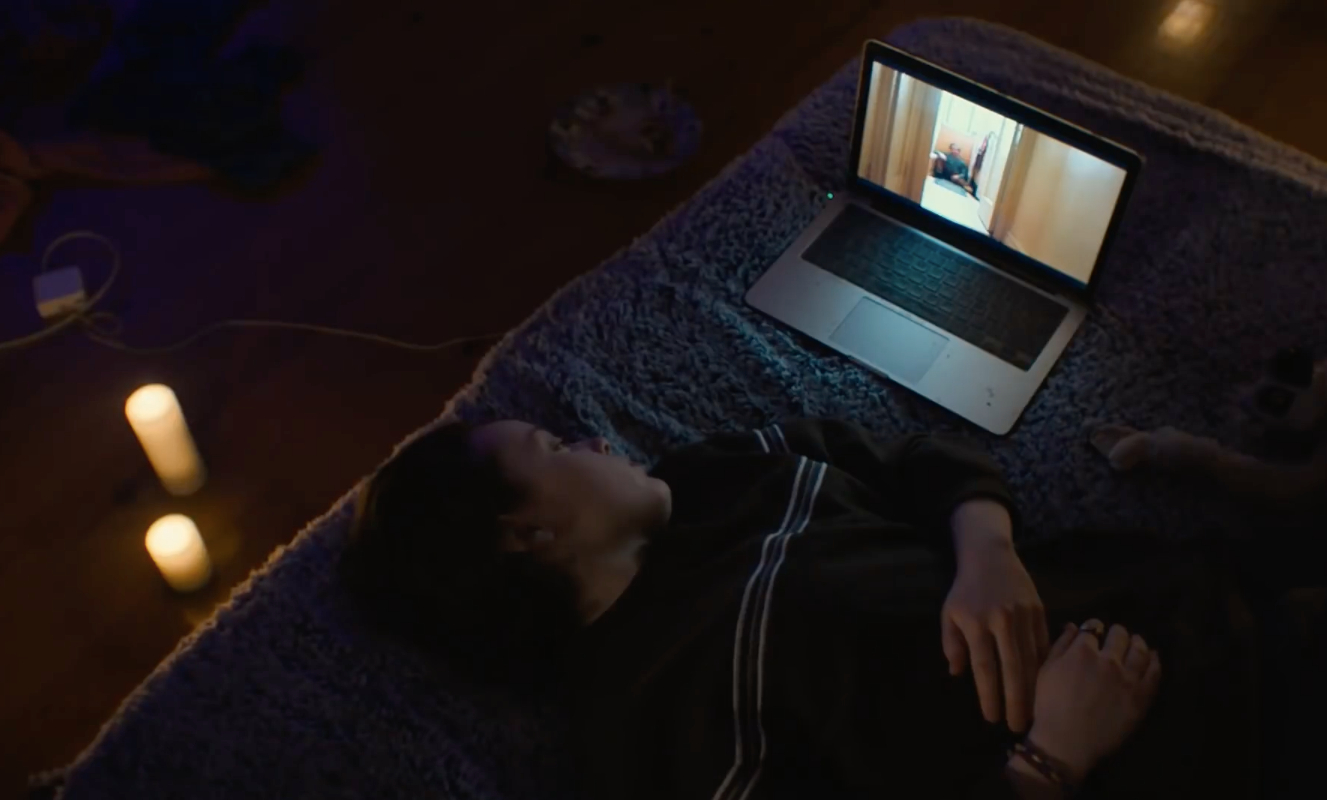 Bo Burnham’s Eighth Grade, another YouTube-based bildungsroman, is an easy comparison point; most reviews point out the baseline similarities: a teenage girl protagonist who seems to feel at home neither in her body nor in her world at large uses her (mostly unpopular) social media presence to process negative feelings about herself, her life, and her relationship with her father. But I’d argue that while Eighth Grade and We’re All Going to the World’s Fair do have a lot in common, they’re less sibling movies and more harbingers of a nascent film genre—a slowly growing collection of movies that takes seriously what it means to have grown up online, to live on the internet.

Though the film does center on digital native Casey, it’s just as much about JLB’s growth as hers—but ultimately, we know neither of them.

From their first interactions, the generational divide between internet dwellers is obvious: While JLB remains committed to old-school MMORPG terminology and practices, using an obvious pseudonym and refusing to show his face online, and even when Skyping with Casey, Casey appears to use the digital landscape as a diary, constantly posting her real face and voice, providing seemingly real information about her life. When JLB asks if they can go “outside the game” to check on her emotional well-being, she’s confused—she didn’t know that was an option.

Though the film does center on digital native Casey, it’s just as much about JLB’s growth as hers—but ultimately, we know neither of them. Nothing is revealed about Casey besides what her bedroom looks like and some basic facts about her life that may or may not be true; in fact, we leave the film knowing slightly less about her than we thought we did. Meanwhile, JLB hovers on the line between compassionate, paternal concern and being overtly interested in a teenage girl he met online (a tension which becomes apparent late in the film but is never totally resolved). A woman whose face is never shown wanders in the background of some shots of his large, beautiful home, and she’s credited as “JLB’s ???”—maybe his wife, maybe his mother, maybe someone else. He spends most of his time in an offputtingly adolescent bedroom that may be his own childhood bedroom or may belong to his own child, now grown, or dead, or estranged. It’s unclear.

What is clear is that JLB feels compelled to save Casey, whether that’s because he sees himself in her or sees in her someone else he’s lost. When he worries about her mental health, he tries appealing to her by telling her about his own trouble fitting in as a teenager. 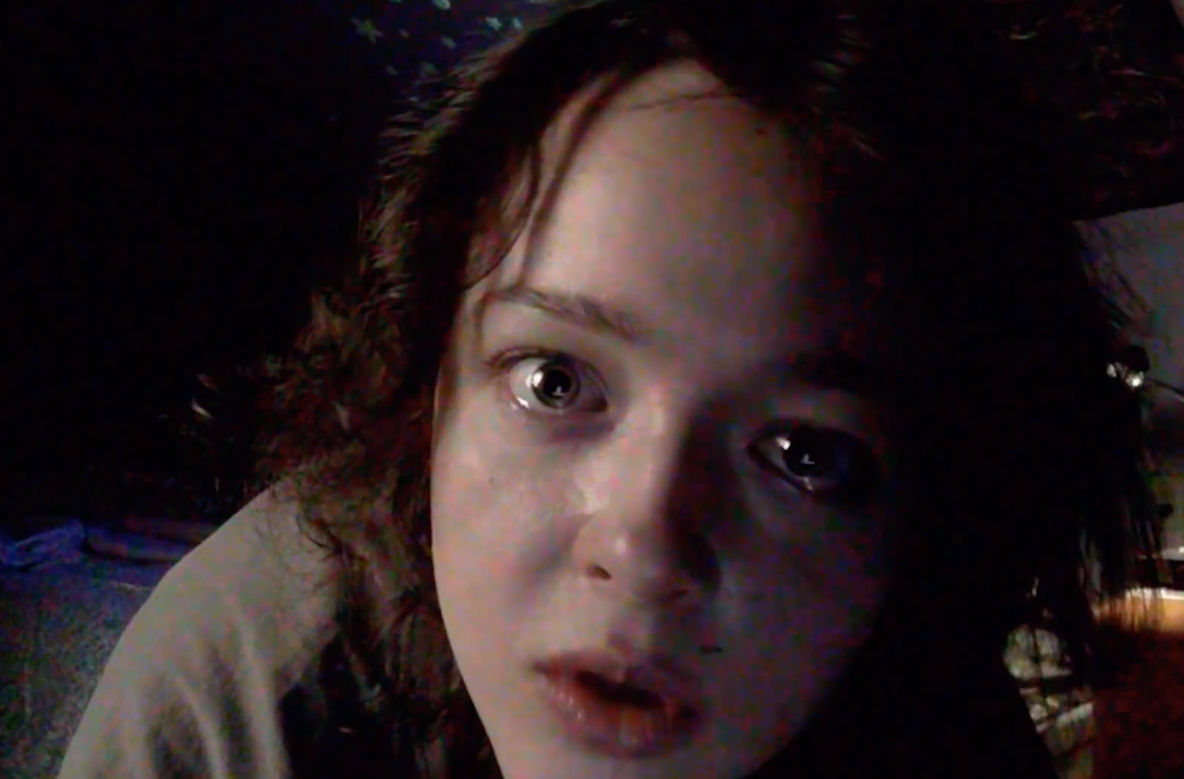 With that in mind, it’s also easy to view the film as a kind of trans allegory. Jane Schoenbrun, the film’s writer, director, and producer, is openly trans (using they/she pronouns), and the film’s ambiance certainly fits the claustrophobic, dysphoric bill: the angles are wrong, the colors are dark, everyone is changing in ways they’ve chosen but aren’t sure how to reconcile. Everybody wants to be somebody else. Casey (with the gender-neutral name it’s later revealed she chose for herself) dresses exclusively in over-sized t-shirts, hiding her body, whether out of gender dysphoria or the body image issues typical of all teenage girls. One wonders why she might choose a game that demands (at least the fantasy of) bodily transformation.

We’re All Going to the World’s Fair is thus an incredibly queer film with no openly queer characters, no same-sex relationships—not even same-sex friendships. The ambiguity of JLB’s living situation also contributes. It’s a combined effort to make the viewer want to claw their way out of the experience, often less through terror than relentless, tedious discomfort. This queerness calls to mind both the overwhelming queerness of some online spaces (particularly fandom spaces) and the overwhelming homophobia of others (4chan, the home of creepypasta). Without reference to explicit existing online cultures, Schoenbrun successfully implies and implicates a great number of culturally online practices and histories.

When the film begins, we’re faced with two alternatives: either everyone’s pretending, or Casey’s deepest fear is true, and she’s the ultimate outsider, merely mimicking what comes naturally to others. Either possibility is cause for concern.

Ultimately, though, the film tells us what’s true about the game and what isn’t, a choice some supernatural horror fans might resent. The film’s attention to traditional narrative rules is also somewhat tenuous—there are very few (though I won’t say there aren’t any) big plot twists or mic drops moments. For some viewers, this may make for a boring viewing experience; for others, its experimental, meandering bent may feel refreshing and true to content.

This film should be required viewing for anyone who has ever been part of an online community, or anyone who has ever wondered why others would be. It may bore you a little if you’re used to fast-paced, fright-oriented horror movies, but the ending may also make you cry. I think that’s a risk worth taking.

We’re All Going to the World’s Fair is currently available to stream for purchase on Amazon, Apple, and Vudu. HBO Max has obtained streaming rights for later release.