The Walking Dead Season 11 Episode 24, “Rest in Peace,” is the final episode of the main show in the Walking Dead Universe. It begins with a frantic Daryl trying to save Judith after she was shot by the worst Governor ever, Pamela Milton. Plus, there are a few deaths and we get to see Lance Hornball as a biter. The Governor Reacts to all of this. WARNING: Spoilers for this episode.

The Walking Dead S11E24 is an episode we’ve both looked forward to and dreaded. It is the culmination of 11 seasons of a show that has touched so many people’s lives. With the fate of the Commonwealth’s people at stake, and Pamela Milton holed up and leaving her people to die, the crew must stop a huge herd of biters filled with variants. Plus, Rosita is on a quest to find and save Coco. With some amazingly acted scenes of grief, heroism, and sharing of feelings, this episode should not be missed. Though it has more epilogues than the Lord of the Rings. The Governor reacts to and reviews this episode which shows the fates of Ezekiel, Aaron, Mercer, Princess, Magna, Yumiko, Luke, Jules, RJ, Jerry, Lydia, Elijah, Carol, Maggie, Negan, and all the rest of the crew.

The video used in this reaction belongs to AMC and is used in compliance with Fair Use Guidelines.

Check out this special video of the Governor vs Negan! 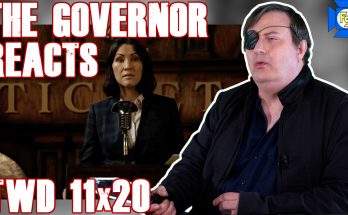