I recently had the opportunity to attend an early screening of The Suicide Squad in New York City and I’m glad I did. It was a fun event with lots of cosplayers and was definitely a great experience. 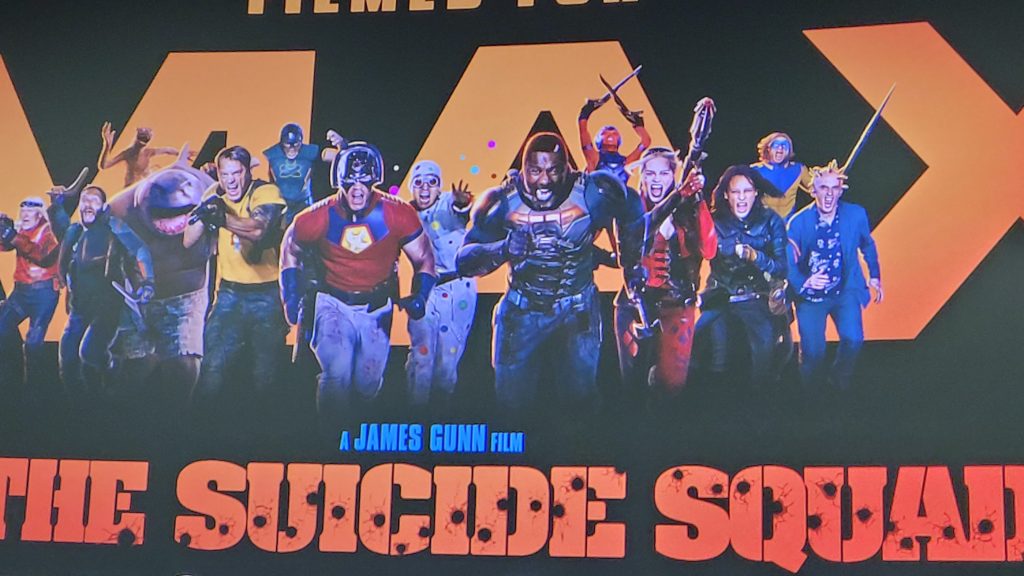 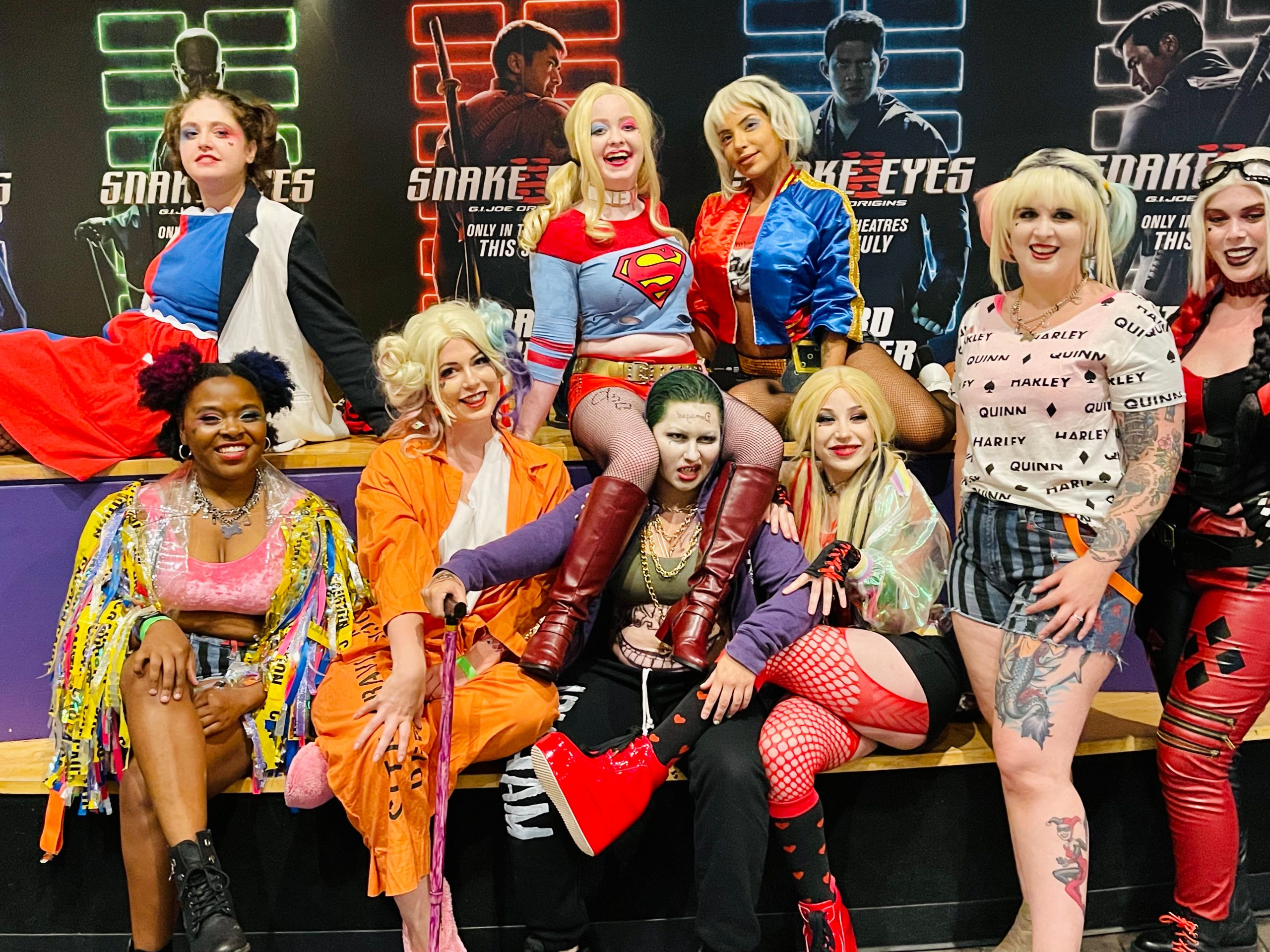 As you might imagine, there were lots of Harley Quinn cosplayers. But the outfits and styles were varied, with classic cartoon Harley, Harleys in dresses, Harleys in costumes from this movie, the previous movie, the Birds of Prey film and even video game versions of Harley. There was also a Supergirl/Harley Quinn mashup and a couple of men dressed as the Clown Princes’ ex (Harlan Quinn? Charley Quinn?). But other DC characters were represented, with a couple of Jokers (who isn’t in the movie), Rick Flag, Lex Luthor, Superboy, and a King Shark, to name a few. Those not in cosplay either dressed fancy or wore appropriate DC-themed t-shirts. It was a very festive crowd and a great opportunity to see local cosplayer friends without going to a con. 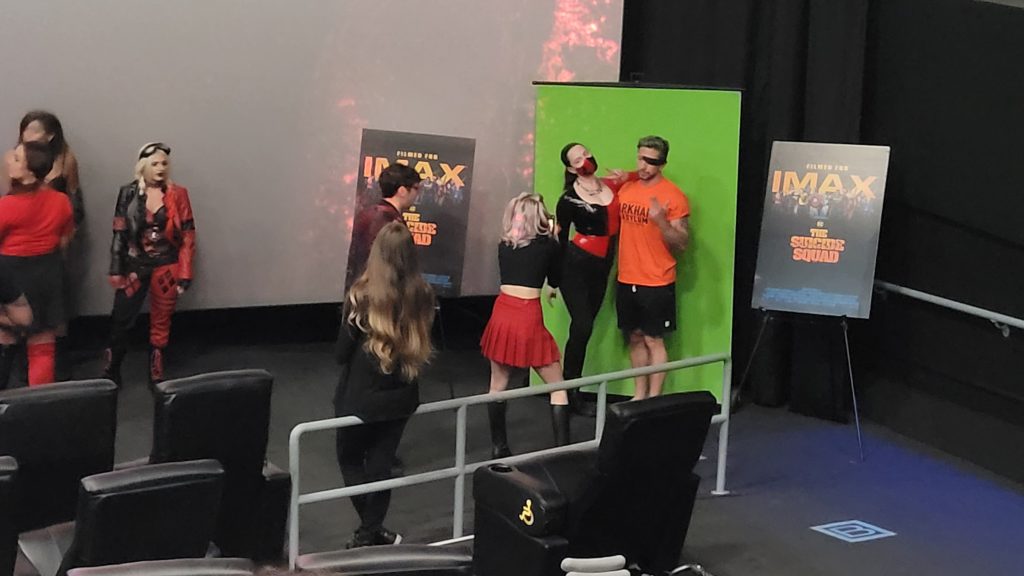 The event organizers provided refreshments to the attendees and erected a green screen in the front of the theater for pictures. A QR code was provided to allow various backgrounds to be applied to the pictures. But then it was time for the green screen to be put away and the film to begin. No previews this time, it was straight to the action.

I have to admit, I did not hate the first Suicide Squad film. To me, it was entertaining, though not as good as it could have been. This film is a sequel, but the tone and story are really what the first film could and should have been. And it did NOT take itself too seriously, which was the right call. James Gunn was apparently given free reign on this film and he did not disappoint.

This movie was packed with both action and humor. Though I will give fair warning. There’s a reason for the R rating. There is plenty of gore, swearing, and even brief nudity. This is not a film to which you should bring the kiddies. 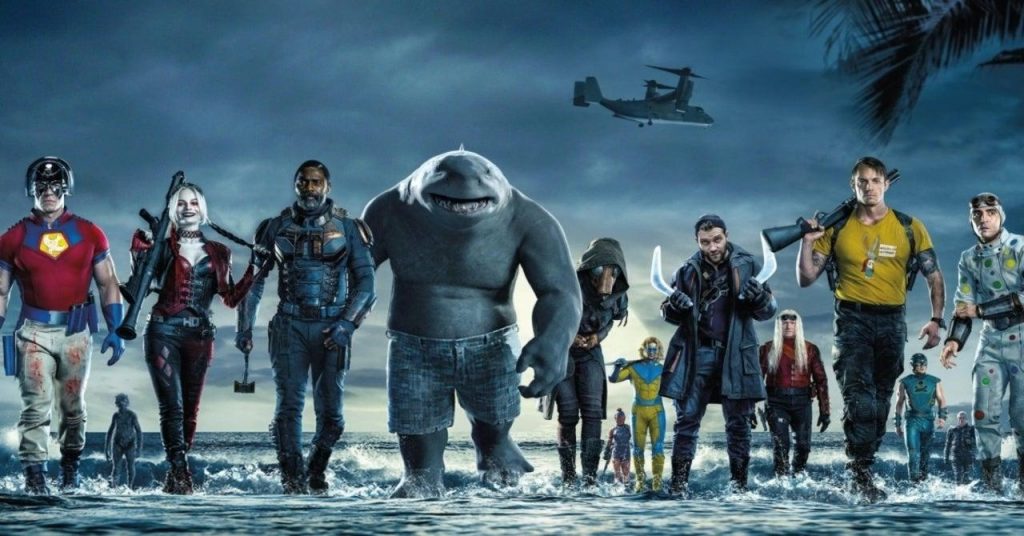 Idris Elba as Bloodsport was outstanding in this movie, but John Cena’s Peacemaker kept up with him. This may very well be John Cena’s best role to date. Both of these actors had great on-screen chemistry that never failed to entertain. Margot Robbie totally embodied Harley Quinn as usual and switched personas between ultra-nutty and ultra-violent in a blink. David Dastmalchian was a true standout as Polka-Dot Man and it breaks my heart that he wasn’t chosen to play Morbius by Sony (sorry, man, I know how much you wanted it). Daniela Melchior was the heart of the team as Ratcatcher II. But Sylvester Stallone’s King Shark was truly amazing and endearing. 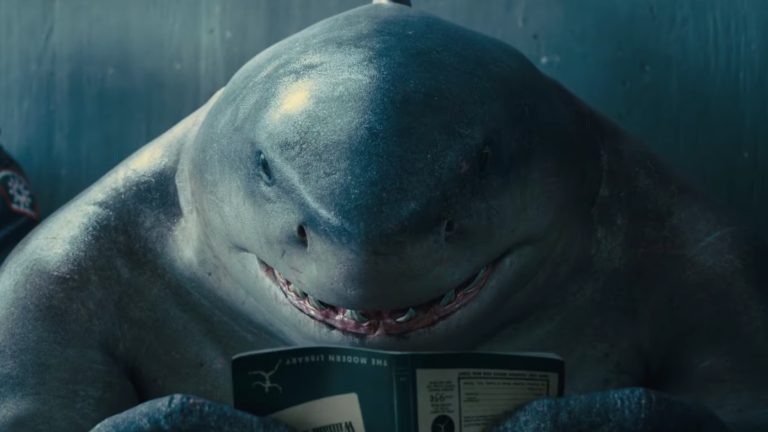 We did get to see some returning characters aside from Harley, with Joel Kinnaman’s Rick Flag and Jai Courtney’s Captain Boomerang returning. And there were some great characters who we might have wished to see more of, but it’s hard to have that large of a team and keep it from getting bogged down. The villains… well, there were two sets. There were your brutal dictators of Corto Maltese who were not exactly the nicest of guys, but they had Peter Capaldi’s Thinker working for them, which made it worse. Amanda Waller was her usual ruthless self and was a villain… kind of… to our “heroes.” Viola Davis reprised her role and brought that same cold-hearted vibe that fits the character so well. And the antics of her support staff… just awesome. But the real enemy, as seen in the trailers, was Starro. 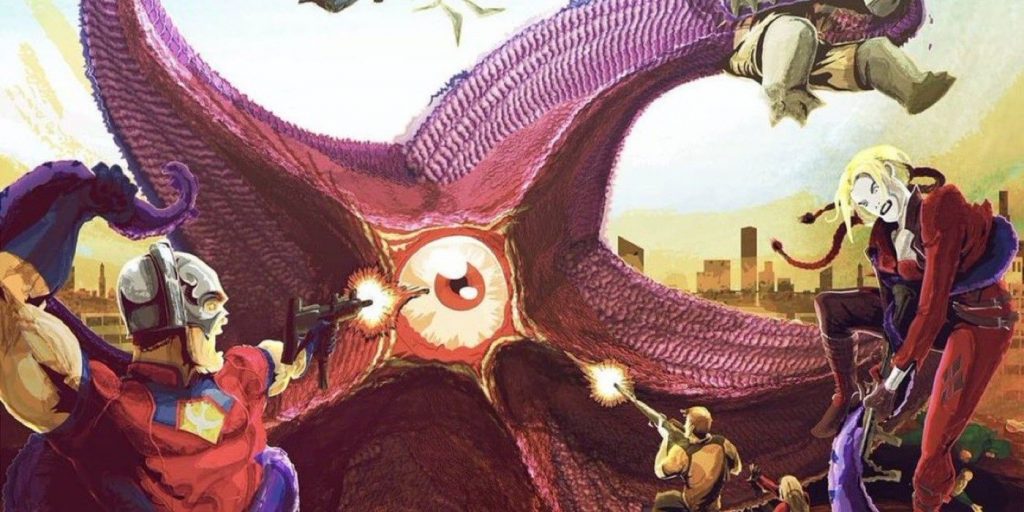 How this starfish-shaped, one-eyed villain causes problems for the team… I’ll leave you to see the movie for that. But the character was treated with all the reverence he deserves, which isn’t much. Great visuals all around and it was refreshing that the team didn’t have to face off against a giant gas cloud or a sky beam.

I would definitely recommend you go see this movie. James Gunn put together a stellar story and cast for this outing of Task Force X. If you hated the first film, you’ll love this one. If you didn’t hate the first one, this one is still better. I would give it 4.5/5 stars.

The Suicide Squad hits theaters and HBO Max on August 6th, 2021, and is rated a very warranted R.