Morality for The Man of Tomorrow

Superman’s thematic ties to religious icons are no secret. Created by two Jewish men a year prior to World War II, Jerry Siegel and Joe Shuster borrowed from religious heroes as much science fiction ones when crafting Superman into a symbol of hope for the oppressed. Sent in a rocket ship from his home, his origin has similarities to Moses, who liberated the Israelites out of slavery in Egypt. Later, as Superman changed hands to new writers, he began to show parallels to Christian figures too. Now, in a time where the Western world fluctuates between apathy towards religion, and fear of extremism, where does the Man of Tomorrow stand?

When we open in Superman #41, the planet Galymayne is about to explode, and a religious faction of the planet will not let their inhabitants evacuate. With their powers weakened by Galymaynian ‘faith magic’, Clark and his son, Jon (Superboy), race against the clock to save any Galymaynians willing to escape the Suicide Planet before it’s too late.

If I’m honest, I was rather indifferent on the last issue of Superman, where we were first introduced to the idea of the Suicide Planet. The story felt a little too familiar. Clark and Jon were de-powered again, and to top it all off, my fave, Lois Lane, was nowhere in sight. But the story was fun enough, and had some interesting quips about the Kryptonian sun god, Rao, which kept me invested.

Wednesday’s issue of Superman is thematically more concise than Superman #40, and realises a theological debate only hinted at in the previous issue. Writer James Robinson pulls together loose threads of dialogue which may have felt clunky and out of place in the previous issue, and reveals their purpose in a satisfying, though bittersweet, end to the Suicide Planet storyline. 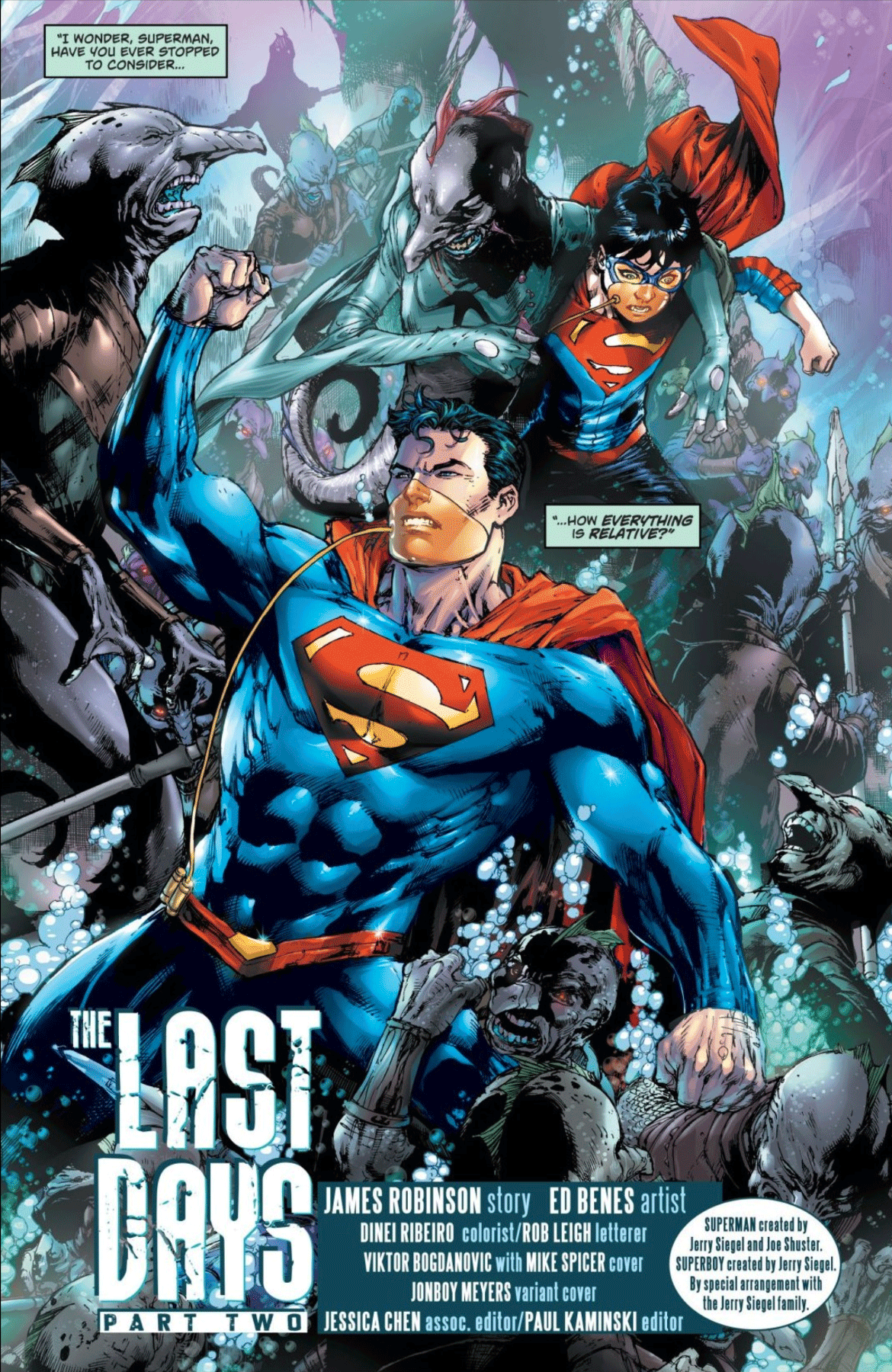 Before I launch into want I really liked about the issue, I’ll get some of my criticisms out of the way. While the philosophical aspects of Superman #41 were by far the most interesting aspect of this week’s issue, the story’s construction had room for improvement. Had the writing perhaps been more experimental (something Batman comics have been doing well as of late), or even just a little more refined, Superman #40-#41 could have been more effective. There are also times when the dialogue seemed a little off, and moments when the visuals could be more grabbing. That being said, artist Ed Benes and colourist Dinei Ribeiro do have a particularly shocking, yet beautiful, sequence of visuals towards the end of the issue, which unfortunately, I can’t get into without spoilers.

As mentioned before, Clark and Jon’s classic depowering also had no real consequences to the story or for the characters, despite an interesting symbolic reason behind their loss of strength. This plot device falls short in its execution, coming and going too quickly for it to resonate meaningfully. Simply put, the concept had a lot of potential, but needed more time to be realised. However, while Superman #41 wasn’t perfect, it’s a story with depth that shouldn’t be overlooked.

From Fantasy to the Real World

In the twenty-first century, Superman’s been more distant from religious discourse – perhaps in an effort to depoliticise comic book characters and open them up to a wider audience. Robinson reopens those channels through the allegory of Superman’s quest to save the Galymaynian people who believe that their God ‘Dhermet’ wants them to die along with their planet. If you’re thinking that Superman’s quest to intervene and save everyone, regardless of whether they want to be saved, seems familiar, you’re probably right. In the Western world, disrupting others’ religious freedoms and/or a nation’s right to state sovereignty is a common theme. It occurs in both generally accepted instances, such as forbidding cultural practices that put others in danger and conflict with federal laws, or more contentiously, as failed peacekeeping interventions by the United Nations. Indeed, the United States’ infamous ‘Muslim’ travel ban on some level, represents an effort to enforce Western cultural values by eliminating the ‘other’ and any supposed danger they might represent.

In Superman #41, writer James Robinson centralises conflict around the right to life versus the right to sovereignty and freedom of religion. The story is compelling on more than one front, challenging values fundamental to Superman as a character, too. On the one hand, Clark’s a survivor of his own planet’s mass-genocide and an extinction-level event. He knows, more than the Galymaynians, what it means to lose the life, culture and progression of an entire society. On the other hand, there’s always the chance that Galymayne’s god does exist. Equally, what right would Superman have to question their beliefs, anyway?

In an effort to dissuade the Galymaynian leader from staying on the planet, Clark says, “I believe Derhmet would want you to live”, to which the leader responds, “Of course you do.”.

While once, many years ago, Superman was the kind of character who would leap in and save everyone – other beliefs be damned –  we no longer live in that kind of world. The Man of Tomorrow has evolved along with society – even at times being a few steps ahead of the curve. It’s this conflict that makes Superman #41 the read it is.

There’s a quote from the end of Superman #41 which embodies the philosophy of the story – to some, wise, and perhaps to others, contentious. Nevertheless, it’s an indication for the next step in the modern Superman’s evolution as a character and a nod to his religious beginnings. In the issue, Jon asks his father whether he believes in Rao, the sun God of the Kryptonian people. Clark responds, “I’ve seen too much not to believe in ‘something’. But this is the important part… ‘something’ isn’t everything.” .

Superman #42 hits the shelves on the 7th of March.

Superman #41 opens a meaningful theological and philosophical debate, lending to the evolution of Superman as a character.

View all posts by Kezia Holland →