Bobbito Garcia talks about the inspiration behind the project:

“Que Bonita Bandera” has been an anthem for all Puerto Ricans worldwide, however many aren’t aware of the truth behind PR’s flag and how it reflects the independent spirit of my people. Our Stretch and Bobbito + The M19s Band version transforms the music and rhythm to encompass the Boricua diaspora and beyond. The original lyrics were re-written by project creator Edgardo Mirando Rodriguez, and reveal historical context. The music video, which I proudly directed, and accompanying La Borinqueña comic book, created by Edgardo as well, both bring the song and words to a visceral level. I can’t explain how much this all means to be a part of something THIS positive. It’s para mi patria, mi gente, pero it’s so much more than that. People who aren’t even Puerto Rican have watched the video and cried, yo. That’s powerful, and I can’t wait for everyone to enjoy this collaboration once released! In the long run, though, if this project allows the public to understand the conditions of what it means to be a colonized state, in terms of both land and mind, then that supersedes any entertainment value it may offer . . .” 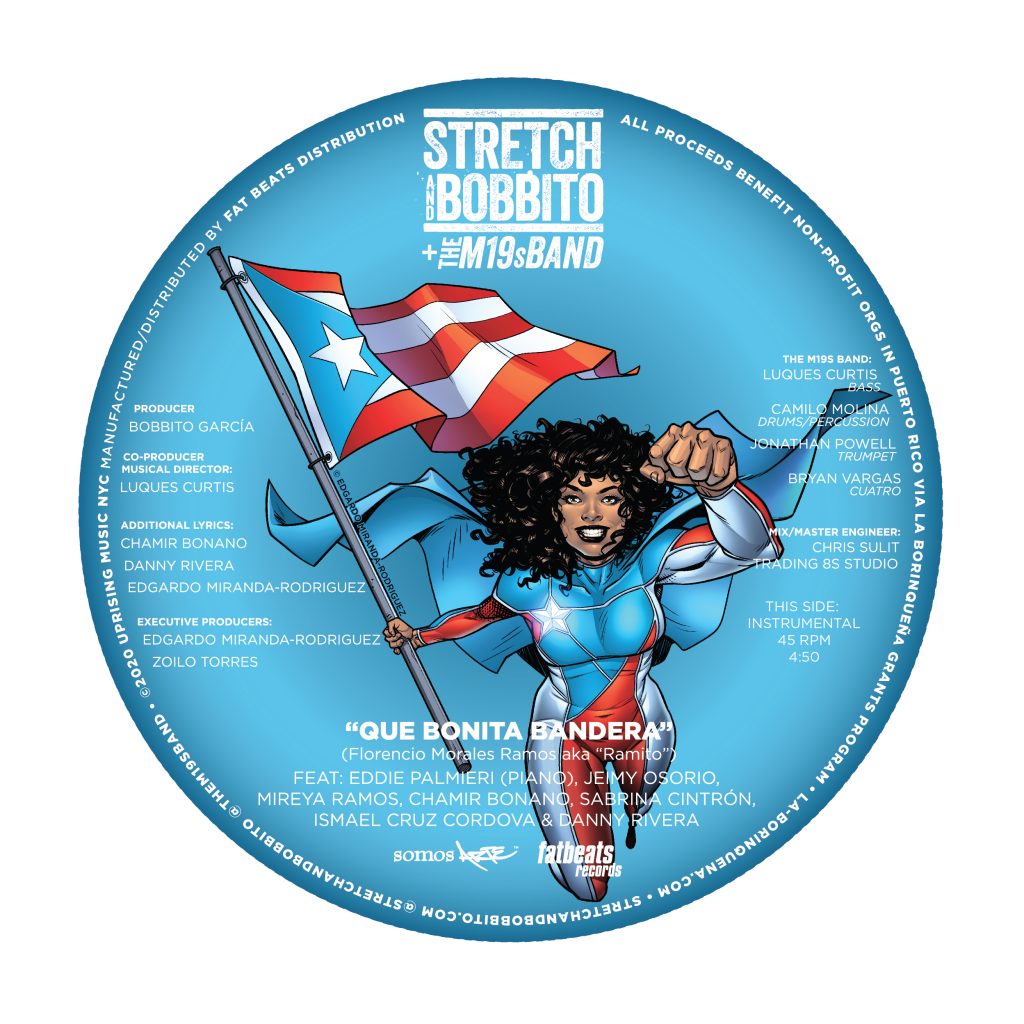 Que Bonita Bandera can be purchased on Fat Beats for $24.99, and includes a 7″ Picture Disc + Comic Book. The song is also available on streaming services, and available for digital download on online music stores.

All proceeds from Que Bonita Bandera will go to the Borinqueña Grants Program; Edgardo Miranda-Rodriguez talks more about that decision: ” We decided that 100% of the net proceeds would go to our La Borinqueña Grants Program, which annually for 3 years since its inception has awarded $165,000 to non-profit organizations in Puerto Rico dedicated to the preservation and celebration of Afro-Puerto-Rican (Afro-Boricua) culture, environmental justice, sustainable farming, women’s health and reproductive rights, literacy, and the arts.”

If you purchase Que Bonita Bandera, not only will you be celebrating the  125th Anniversary (December 22) of Puerto Rico’s flag,  you’ll also be raising awareness of the history and meaning behind it.