I have never dropped everything I was doing and pulled up YouTube as quickly as I did when I got a notification that Vivziepop uploaded the next episode of Helluva Boss today. Fans speculated that this second episode of season 2 would come out in October; however, the common assumption was that the release date would be on Halloween, as both the first and final episodes of season one aired on October 31 (in 2020 and 2021, respectively). What a pleasant surprise it was when the episode dropped early instead!

When the first episode of season 2 premiered on July 30 of this year, I wasn’t writing for Fandom Spotlite yet. But I’m here now, so let’s dive into what happened in this episode and how I felt about it!

Loona and Octavia meet at last! 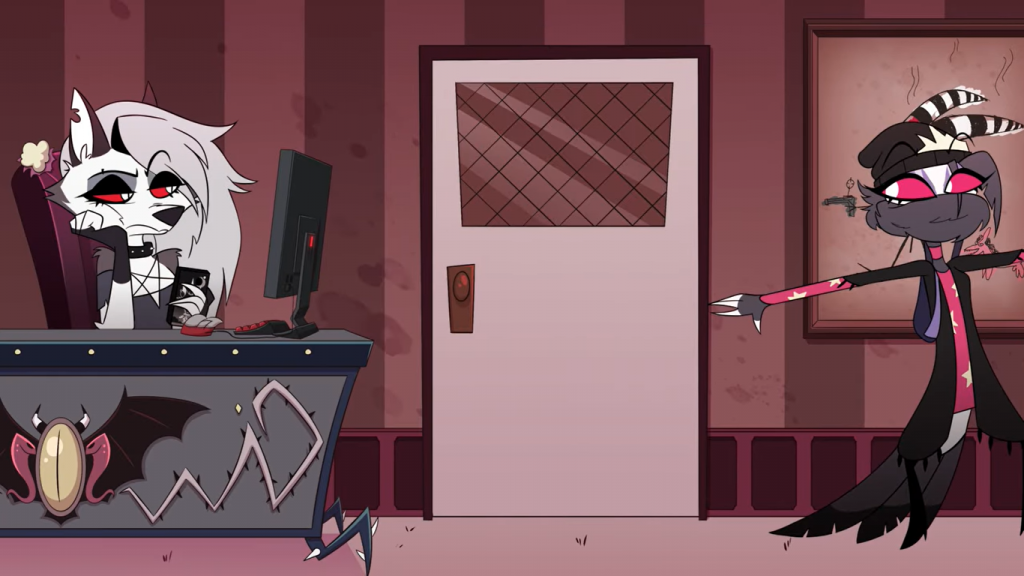 There is so much fan art of Loona and Octavia together that I sometimes forget they’ve never actually met in the show. Not until now, that is! They were bound to meet at some point, given the relationship between their dads, but leave it to Helluva Boss’s writers to come up with a silly, almost comically underwhelming first encounter: Octavia breaking (well, actually, just walking) into IMP headquarters while Loona sits by and allows it because she’s mad that Blitzø yelled at her.  Seeing as they’re both angsty teenagers, this oddly nonchalant meeting just makes sense for them. Also, I love that Blitzø’s password for a safe containing a powerful grimoire holding the key to other dimensions is “1234.” Of course it is. 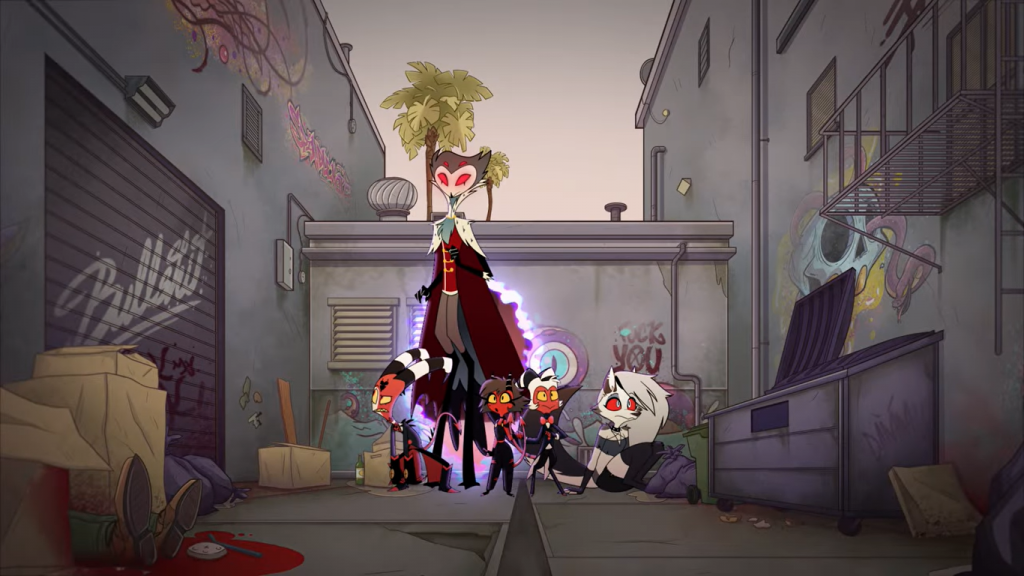 Helluva Boss is chock-full of hilarious quotes, and this new episode was naturally no exception. My personal favorite lines were: 1. Moxxie saying “He seems to like you, sir” to Blitzø (regarding Stolas), because that is just SUCH an understatement; and 2. Blitzø remarking “This doesn’t look much different from Hell” upon arriving in Los Angeles. I’ve never been to LA myself, but honestly, I’m pretty sure any big city in the human world is probably fairly similar to Hell. 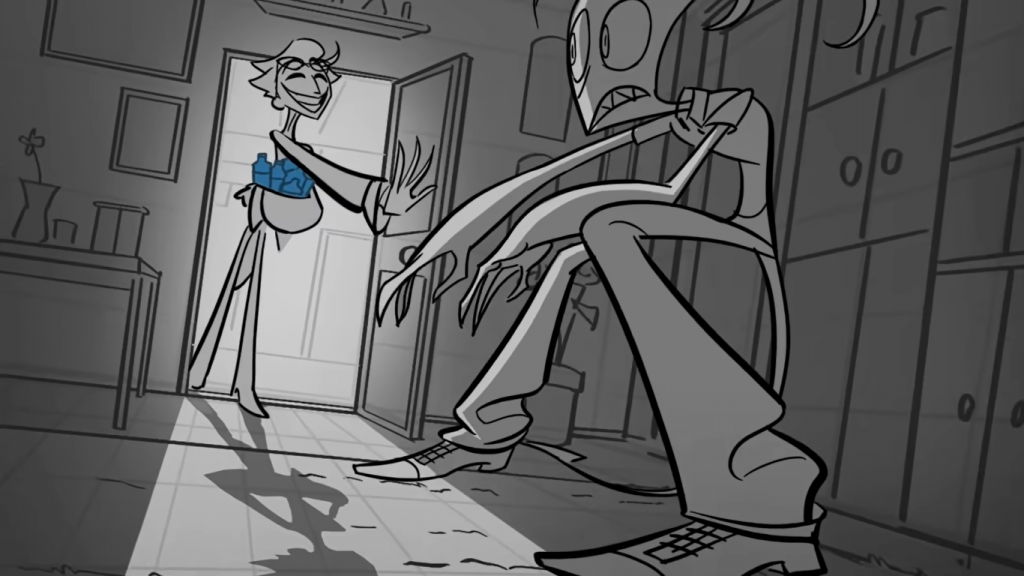 When I saw the above sketch from the season 2 trailer released way back in December, I immediately knew the man in the doorway had to be Stolas’ human disguise. I don’t mean to brag, but I was correct! Here’s the same frame, but in color: 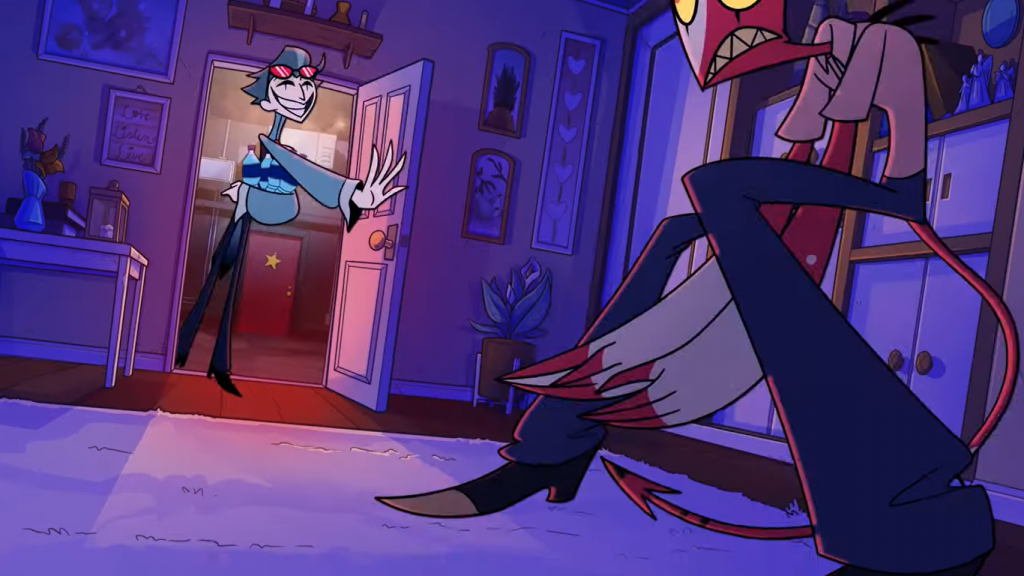 I had a few theories on what the room he was shoving Blitzø through might be, but none of them were even remotely close to the truth: the set of a sitcom that Blitzø is forced to guest-star on because he was mistaken for actor “Brennon Ragers.” This, of course, is a parody of Blitzø’s voice actor and Helluva Boss story co-creator, Brandon Rogers. This was a great inside joke for anyone who knows Brandon Rogers’s name, but an absolute delight for those of us who have been Brandon fans since long before Helluva Boss. Oh, and on the topic of references to other media: I got a kick out of the brief magical girl transformation sequence when Loona and Stolas put on their human disguises. I always love a reference to magical girl anime.

Loona’s backstory, and her softer side. 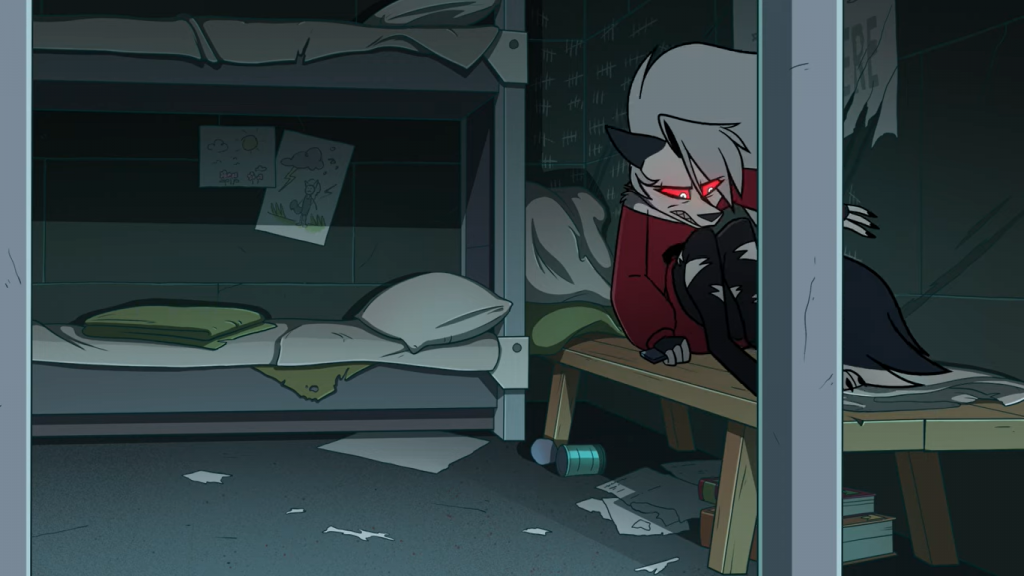 This episode was full of father-daughter moments for both Stolas & Octavia and Blitzø & Loona, but I think the most important one was the brief flashback to when Blitzø adopted Loona. This scene was short, but it told us everything we needed to know. Before Blitzø adopted Loona, she lived in a “Hellhound Adoption” complex that appeared to be a sick combination of a dog shelter and a prison. From the tally marks carved into the wall and the fact that the woman showing Blitzø around says that Loona’s about to “age out,” we can deduce that Loona has been in that horrible place for a long, long time. This backstory adds a whole new level of significance to her relationship with Blitzø. We also get to see a rarer, gentler side of her when she finds Octavia at the observatory. I loved seeing her take on a big sister sort of role, and hearing how she truly feels about Blitzø.

“Why does he hate her more than he loves me?” 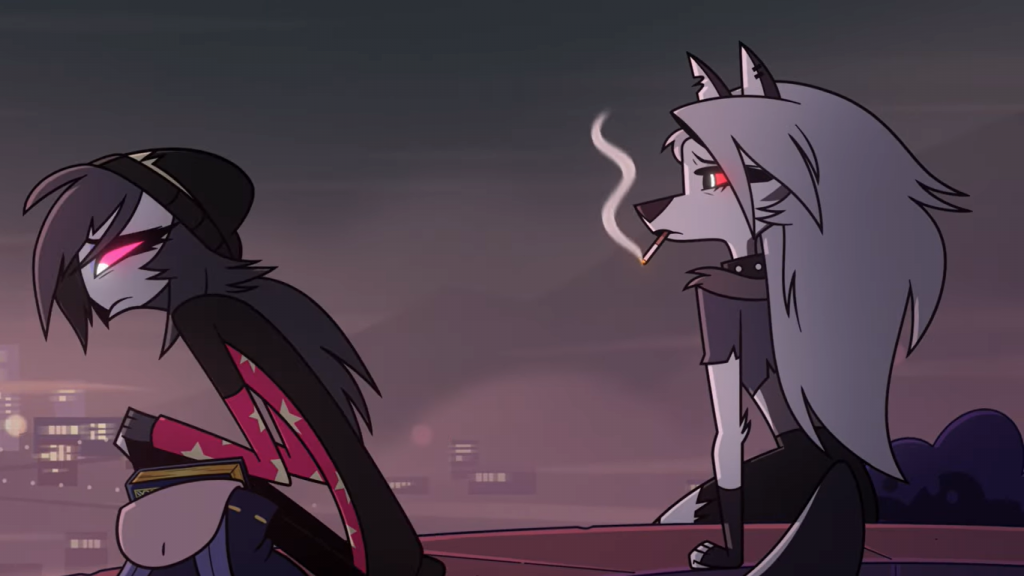 This line hit me so hard, I just had to make it its own headline.  Any child of an unhappy marriage can feel this quote on a deeply personal level. So many of us were ecstatic when Stolas finally built up the courage to divorce Stella, but Octavia did not get to feel that same catharsis. Stolas’ new freedom is also the final crack in any hope Octavia may have held onto that she could have a “normal” family. Her parents never loved each other, and she knows this, but at least when they lived together, they could pretend to be normal. Now that they’ve broken up, however, she doesn’t even have that sad fantasy to cling to. Although Stolas would never intentionally hurt his beloved daughter, parents getting divorced is rarely easy for a child. Seeing such raw, relatable emotion in a show that’s usually so funny makes it even heavier to witness. 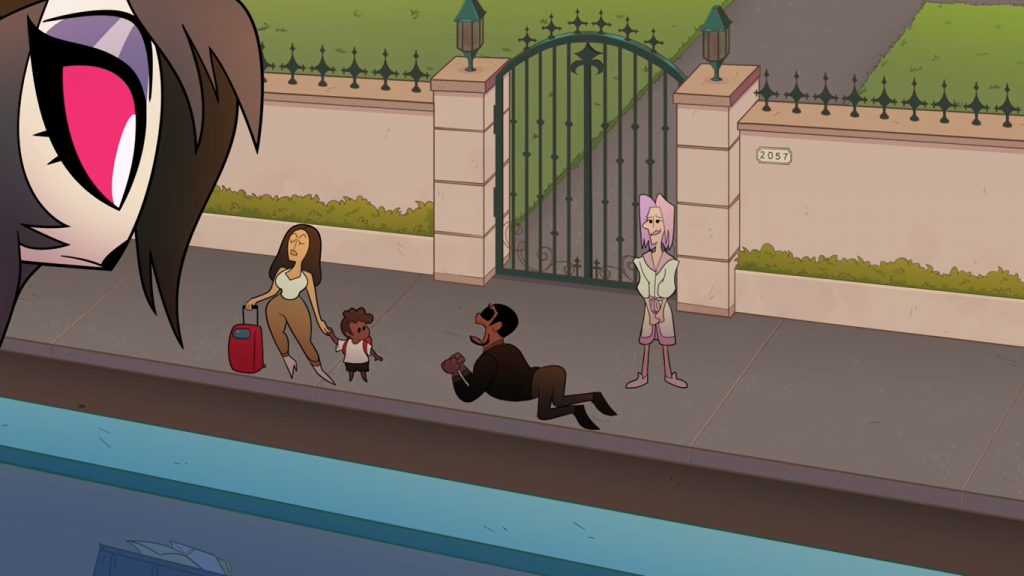 Overall, I was super happy with this episode; however, for the sake of being thorough, I will also share my nitpicks. The above reference to Kim Kardashian and Kanye West’s divorce, as well as Kanye’s rumored affair with Jeffree Star, is a bit outdated. This rumor circulated on Twitter way back in early January, and since the lifespan of celebrity gossip is minuscule, it’s been months since anyone has really talked—or cared—about it. Nevertheless, I can’t pretend that these completely unexpected celebrity cameos didn’t have me cracking up so loudly I’m pretty sure my flatmates must think I was having a mental break. 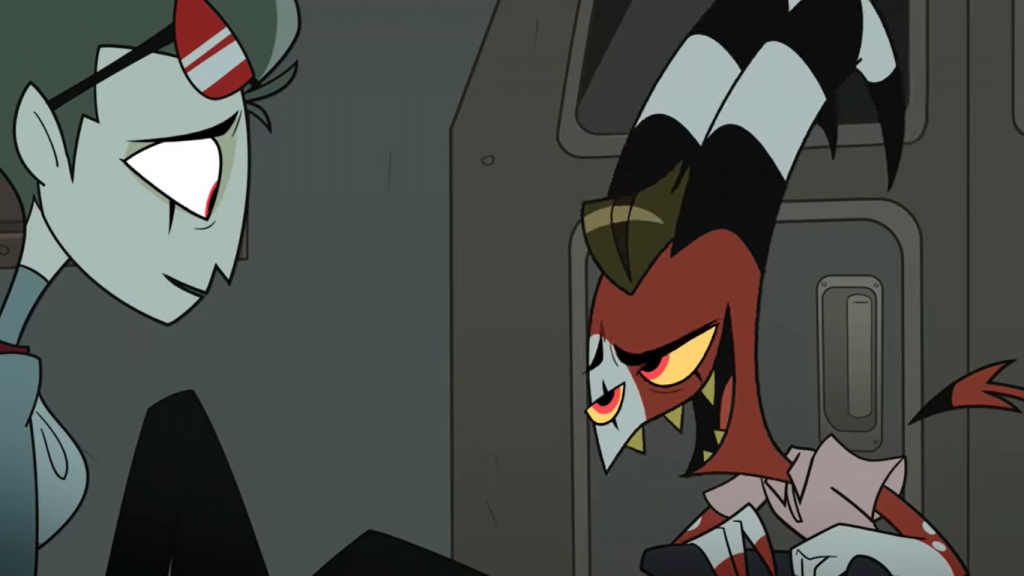 Lastly, when Stolas and Blitzø were trapped in the back of a van together, my heart leaped at the possibility of them having a much-needed heart-to-heart conversation. After all, the last time they were alone in a vehicle together, Blitzø broke Stolas’s heart into a million pieces—as well as the hearts of Stolitz shippers. It’s been just under a year since that episode aired, and I still haven’t recovered. Unfortunately, my hopes for a resolution were quickly dashed, as this scene only lasted mere seconds. But now I’m just being greedy. This is only the second episode of the season; surely they’ll sort out their feelings by the season finale… Right?

It’s a good thing this episode was so satisfying because we probably won’t get the next one until sometime in 2023. In my opinion, though, this series is always worth the wait.

How are you enjoying the second season so far? Share your thoughts in the comments!