Katsucon 2022 had several mishaps this past weekend that has many long time attendees hanging up their badges for the last time.

There have been countless complaints and calls to action about Katsucon’s registration process over the years. The Con still refuses to mail badges unlike many other conventions of the same caliber or higher. This causes nightmare registration lines all weekend long, leading to problems for staff and congoers alike. Attendees reported waiting 3-4 hours in line, having to stand less than 6ft apart, giving no space for social distancing. To their credit though, many reported staff taking vaccination cards and masks seriously and we are thankful for this.

Several attendees with chronic pain and disabilities expressed dissatisfaction with the registration process. The lack of water stations being refilled due to a seemingly overwhelmed staff did not help either. Understaffing can most likely be chalked up to the pandemic and not a full strike against Kastu as a whole. 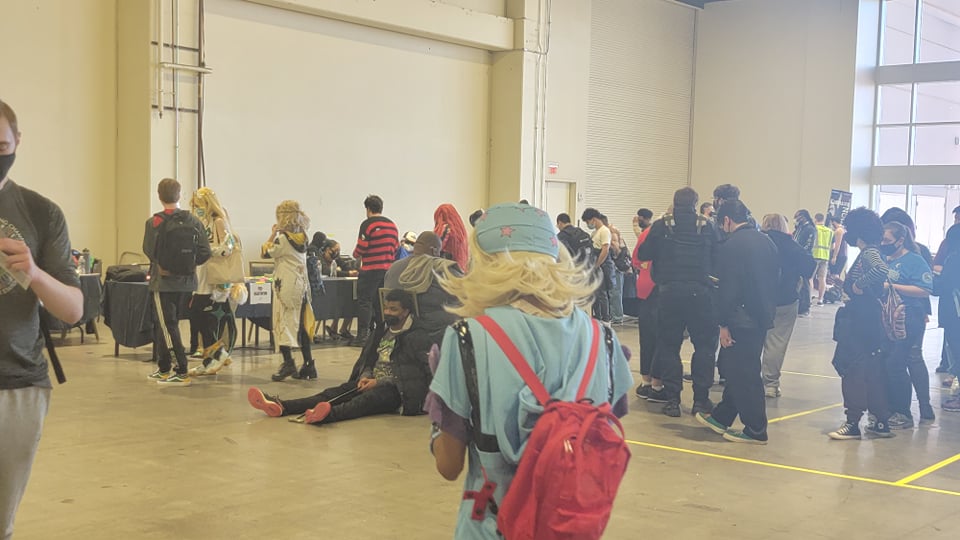 Several friends who did not pre-register reported that the at-the-door line was significantly shorter and felt “unfair” to those waiting. It almost disincentivizes pre-registration and compels attendees to risk at the door badges. 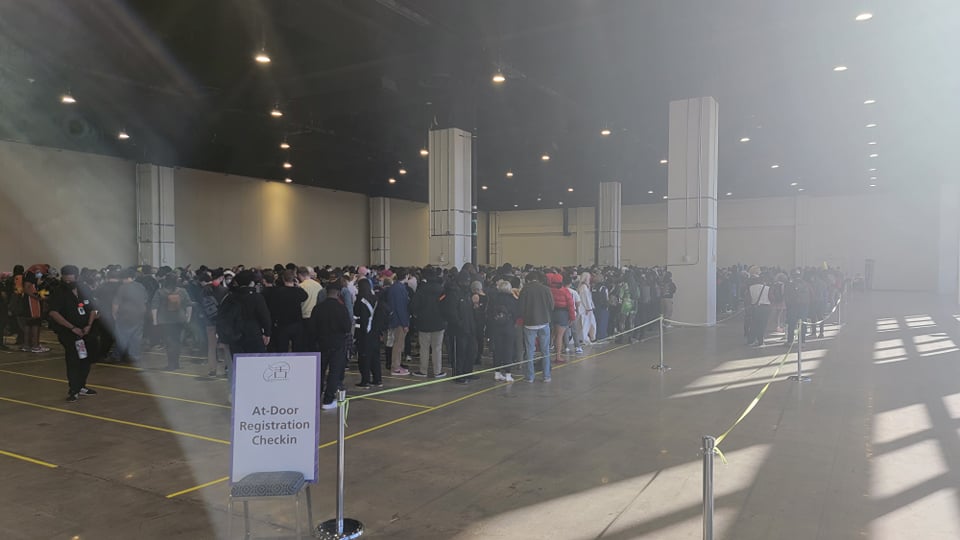 Use Your Inside Voices

In a bizarre turn of events, a Middle School field trip also shared the space during the con. Many rooms received noise complaints, even when not partying. Rumors of underage drinking and harassment circulated through the con as many of us Katsu elders showed disinterest in the new atmosphere.

According to a staff member: 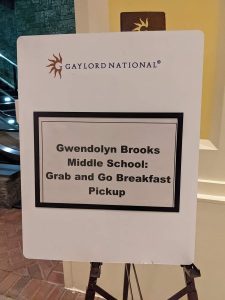 “Katsucon has shared the hotel with a particular field trip event for years, but because of scheduling you just never noticed it…in the past they were usually out of the hotel early in the morning to tour DC, and by the time they get back its usually so packed they just blend in.”

This statement prompts me to question whether Katsucon staff actively works to keep the children from 18+ activities. If it’s true that we have been sharing Katsucon with somewhat unattended children this whole time, it would behoove the con heads to actively tell attendees to keep them aware of potential legal risks.

The staff member went on to say that the evacuation of the Gazebo area was entirely on the Hotel and that the Katsucon staff did not discuss plans to ever require attendees to leave the area prior to midnight.

Even MAGFest, where there are designated areas to communally roar like the X-Men character Colossus, had better management of the party vs non-party atmospheres despite not having the same reputation as Katsu. Those who have been attending the con for decades have taken to facebook groups to vent about the new “vibe” and to declare that this will indeed be their last.

Pose, the rooftop lounge and club that many of us thoroughly enjoy for the atmosphere and talented DJs, was transformed into a vapid cash grab of an Instagram-worthy pop-up bar with overpriced gimmicky drinks and lighting worthy of a middle school Sadie Hawkins dance. Music heard over loudspeakers was underwhelming, much like other music throughout the con. 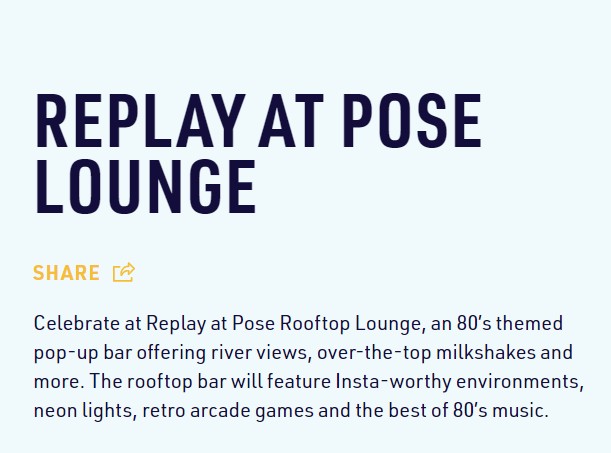 The usual pop-up hall dances and late-night Gazebo Concerts live only in our memories as silence overtook the convention after dark. Anime music was oddly absent, as was the original “weeb” energy now replaced with that of influencer culture.

It’s obvious now that Katsucon is a space for TikTok stars and Instagram Influencers to meet and create likeable content. My Hero Academia, Demon Slayer, and Genshin Impact cosplays easily identify the new majority, with some of them admitting to not knowing what Anime Classics are.

During a conversation I had with a TikTok use dressed as Bakugo, they told me that they did not know Studio Ghibli, Toonami, or Dragon Ball, and had a vague understanding of Sailor Moon. All of these are popular and well-known staples of the community that 5 years ago, would be unheard of that a single Kastu attendee didn’t know what they were.

Speaking with other Katsu Elders it seems as though the swarm of influencers and Gen Z TikTok stars don’t know much Anime outside of the last 5-8 years. Something that creates a massive shift in the overall balance of the Katsu Cosplay community.

But we are not here to gatekeep. Anime fans of all fandoms are welcome, and everyone started not knowing anything. It’s just that personally, seeing Katsucon actively put a focus on influencer culture by paying more attention to the photo-op areas than their gaming or other programming tracks is a difficult pill to swallow.  All the communal aspects of Katsu took a backseat to social media clout.

On February  19th, 1942 President Franklin D. Roosevelt signed Executive Order 9066, stripping people of Japanese descent of their civil rights. Katsucon 2022 fell on the Eightieth Anniversary of one of the most shameful chapters in US History, and we got a lot of them. Unfortunately, Katsucon Heads put zero effort into this Day of Remembrance.

Outside of the musical group Hard Nips, none of the Guests of Honor were Japanese and a majority were white or white-passing. The same can be said for the JCI Presenters. Many of the panels on Japanese culture and its impact were disproportionately done by white or white-passing panelists. It seems as though programming at Katsu was presented and catered to a predominately white audience. 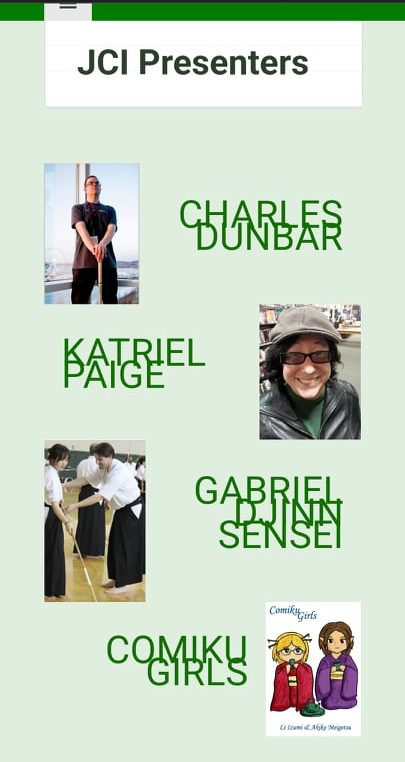 Katsucon does partner with the Japanese Embassy for some of their programming, but I cannot find any information on their website about this partnership. The Japanese Embassy did tweet about three panels they ran on Saturday, but promotion for it came down to a quoted retweet by Katsucon that gained only 11 likes. 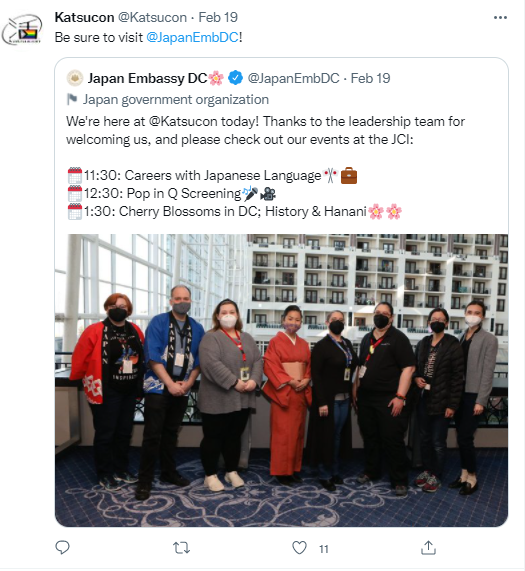 A staffer revealed that Katsucon does not do an audit of how many white and non-white-led panels and events are held over the years. If the Con wants to continue to use Japanese culture as their pull for attendees, they should, in this writer’s humble opinion, be more informed on how much diversity and cultural appreciation they are exhibiting.

While Katsucon did its best in certain areas, there were far too many cons to outweigh the pros for me. Dishonorable mentions would be the overpriced Ubers/Lyfts, parking raised to $69, lack of consistency with bag and prop rules, a paid photo studio at the back of the merch hall with minimal marketing, and ample but expensive food options.

I’m a long-time con-goer who works with BIPOC centered conventions. To me, it’s important to be intentional in creating a space. If you are celebrating Japanese culture, then do so in a way that honors and respects the culture. The atmosphere felt as if Katsucon’s focus was influencers and profit.

Like many of my fellow Katsu Elders, I will not be returning any time soon. I truly hope folks had a good time and changes are made, so that when the pandemic officially ends, Katsucon will become better than it ever was.

So long, and thanks for all the memories.

Bendy Mitchell is a Level 30 horror lover, VHS enthusiast, award-winning cosplayer, prop maker, seasoned Rennie, and professional game master. She's worked with Hunter's Entertainment, Dark Galaxies Gaming, & has interviewed many notable stars of stage and screen. Bendy enjoys playing Cyberpunk 2077 and debating with fanboys ™️ in her spare time. You will most likely find her writing about fan theories or working on the growing success of Obsidian Brews and HBCUCon.

View all posts by Bendy Mitchell →