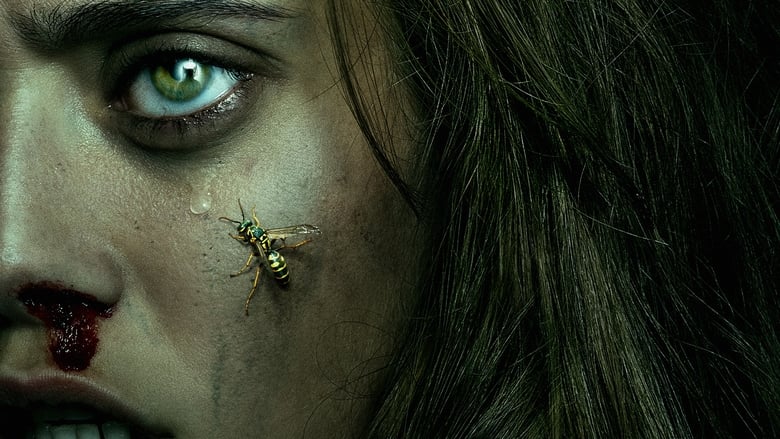 Showtime’s latest series Yellowjackets tells the story of a high-school girls soccer team that become stranded in the Ontario wilderness after a plane crash. Shifting between time periods, the series chronicles the events that unfold and the impact it has on all involved.  To date, only four episodes have been released, but they do more than enough to establish the show as one of the most absorbing, chilling, and frustrating new watches around.

A genre blend of teen drama, midlife trauma examination, and survivalist horror, Yellowjackets wastes no time in telling us that things are about to go feral! Although they leave that more to our imagination thus far. The very first scene shows a terrified girl running helplessly through the harsh, snowy wilderness as she meets her fate in a gruesome and bloody way. Leaving us to question – What exactly is happening in those mountains?

The series follows an unconventional narrative structure that shifts its focus between different time periods. Half of the time is spent with the teens as they navigate the wilderness in 1996, with the rest concentrated on events in the present, as survivors from the ordeal are trying to live their “normal” lives.

There is more than enough meat in both timelines to tell a singular story but the show decides to interweave these together. This decision gives us a frustrating viewing experience as we never stay too long in one situation. Although events in the present are important, they tend to leave a sense of contempt, as more time in the wilderness would be very welcomed!

Time spent in the isolated Ontarian Wilderness immediately hooks you in and leaves you wanting more. It’s visceral, violent, and bloody. The shock factor is palpable as limbs are torn and hacked off, people are engulfed in flames and bodies lay lifeless in the ruins – and this is only from the crash scene! It is hard to ignore the huge Lost comparisons here. The only real difference is a switch in location from a beach to the mountains.

A slow-burn approach is taken as time is made to flesh out the characters. Internal conflict drives interactions as the group tries to pick up the pieces and look for safety. The first four episodes hint at the savagery that’s to come, but we might have to wait some time to get there.

Although the wilderness timeline gives the series a more intriguing narrative, the present-day timeline is not completely disinteresting. An impressive cast list that includes names like Melanie Lynskey, Tawny Cypress, Juliette Lewis, and Christina Ricci shows the series means business, and it’s a genuine bonus to see these actresses take center stage here.

The series uses this timeline to zone in on themes of trauma, which serve as a key focus throughout. These women are now trying to piece together a functional life while holding onto secrets of the past. In fact, two particular storylines are quite engaging as they not only add to the mystery but hint towards occult occurrences. In reality, it’s only one particular storyline that feels cliched and overdone.

One would be forgiven in thinking that a combination of multiple genres could overload a series only four episodes in, but Yellowjackets makes it work. We have horror, survivalist thriller, teen angst, romcom, suburban drama, mid-life crisis, and a potential ghost story all working together.

Sure, the mixing of all these genres does create huge tonal fluctuations but somehow the series manages to hold itself together. The timelines combine to add more questions than give answers but learning more about the mystery at hand will leave you rushing to play the next episode.

Yellowjackets reminds us that the past can catch up with us in more ways than one, and descent into something far more sinister lies ahead.

Yellowjackets is now airing weekly on Showtime and is available on Sky Atlantic in the UK.