Allow me to introduce myself. My name is April Violet. My friends call me Letti. I’m a 30-something woman living in a big city. While I’ve been relatively successful in my career, I haven’t had much success with anything else. Here is a brief list of areas I haven’t been successful in: Dating, getting my driver’s license, Tiktok dances, and catching the attention of Henry Cavill. Henry if you are reading this…I love you. Despite it all, I have become a human library for all things pop culture and fandom. It has not only become my career but is fully integrated into my way of life. Thanks to the great people at Fandom Spotlite, I will be chronicling my life and giving out advice in a segment I am calling, “Life According to Fandom.” This column will be equal parts satire, embarrassing truths, and honest advice. I don’t proclaim to be an expert in life, but I am an expert in Fandom.

This month we are going to talk about revenge. As someone who is offering unsolicited advice, I should be telling you to “be the bigger person,” and “kill them with kindness.” Let’s get real for a moment… F&*K THAT.  A little while ago, I found myself on the other end of a perplexing phone call. You remember phone calls, right? In this conversation, someone I loved decided to betray my trust and tried to pass the accountability off to me.  Since I don’t have peanuts for brains, I let them know, “nice try.”

After hanging up and blocking the gaslighter on everything; I found that the flames of my anger were still ablaze.  What did I do? If you answered, “plotted a petty revenge knowing full well you are messing with your good karma,” you are right.  I would be remiss if I didn’t advise you to “NOT TRY THIS AT HOME,” but in my scheming, it made thinking of some of my favorite fandoms where revenge was the driving force.  So, here is some inspiration or what not to do when it comes to Fandom & Revenge.

Attack on Titan is a global phenomenon, that helped push anime and manga into a new stratosphere.  The dark, high-stakes series shifted the narrative that anime and manga are for kids. The story revolves around a war between Humans and monstrous man-eating beings called Titans. In the beginning, you are made to believe that the central focus is on humanity wanting revenge on the Titans for forcing them to live in fear and in dwindling numbers.  Eren gave an iconic speech after watching the brutal death of his Mother.  The more you watch/read you realize that humans are trash! Sorry, not sorry.

I don’t want to get into spoilers but there is a tonal and plot shift that has you routing for the Titans. The revenge they seek seems wildly justifiable though the means…a skosh extreme. One word: genocide. I’m definitely not condoning their actions! However, in the world of AOT, there is no room for level-headedness or looking for common ground. This is war.  Most people are not dealing with situations that require extreme measures but when you are hurt it can certainly feel that way.  Before making a decision that can have severe consequences remember this {SPOILER} in revenge there are no winners.

Is it weird to say that Civil War may be a “family-friendly” recommendation? Anyways, Civil War is a film all about revenge when the source material it’s based on had a different focus. You have the heartbroken T’challa wanting revenge for the senseless murder of his father. We also later have Tony also wanting revenge for the senseless murder of his parents. Wait…I’m sensing a theme.  Who is responsible for these crimes? Bucky Barnes.  Though technically he only committed one of those murders and even then he was under mind control.  The Winter Soldier finds himself the catalyst for a once united Avengers team to split into opposite sides.  We get a lot of great action scenes, and character development, and are introduced to some new heroes. Also some great shots of America’s Ass.

Back to revenge. The plot twist of the film was this was all an orchestrated plot to get revenge on the Avengers for what they did in Sokovia ala Baron Zemo. Baron Zemo was heartbroken that his family senselessly died during the events of Avengers: Age of Ultron.  While some will point out the many issues with his plan, in the end, he did achieve his ultimate goal – fracturing the trust between friends.  In Civil War, we learn that revenge spreads like a virus, affecting all in its path. We also learn that sometimes you gotta play the long game. All joking aside, revenge may satisfy one hurt soul but it can never heal that soul. Also, good organization is key.

God of War(2005)
God of War is a video game franchise that is universally loved and for good reasons. The story, the characters, the gameplay, and the music, all are top-notch! Speaking of story, our main protagonist is Kratos, or as my real gamers call him–daddy.  Kratos finds himself betrayed by Ares, the God of War, and decides he isn’t fit for the job. So, he decides he is going to be the new God of War.  Revenge and job stability…I get it.  Kratos’s revenge consumes him and darkens his heart as he is willing to do anything to achieve his goal; which includes the killing of the innocent and anyone who gets in his way.  His rage allows him to tap into power he didn’t imagine he had and yet he can’t open a wooden door… 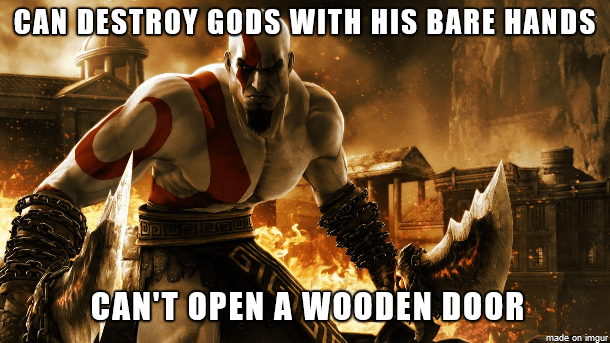 In the end, Kratos learns that there are more important things than revenge, like his son. Mostly. Atonement? That’s for another day and another game. Just like in the previous entries, wanting revenge is not wrong. You have been hurt deeply, and that hurt warps the way we see reality and how we operate in it. There comes a point in your revenge where you ask yourself, “What do I do once I have my revenge?” When you dedicate so much of your time and energy to revenge it becomes your identity.  Yes, it did teach many to never cross Kratos; and you could end up with similar results.  As the old cliche goes, “revenge is sweet,” but will you come out Godly like Kratos or just a Bitter Becky? The real lesson is that with hard work and dedication you can become anything you want to be – even the new God of War! I’m joking. 👀

Please don’t get revenge on me for tricking you into thinking this was revenge-positive. As someone who messed up their good karma by sending someone a box of glitter, shaped like penises, I’m trying to get my good juju back. 🤷🏾‍♀️ I still did my best to offer you both sides of this topic.

What is your favorite fandom centered around revenge? Share with us in the comments below.

See you next time.

Life According to Fandom — Goals

April Violet is as colorful and youthful as her name. The aspiring author spends her time enjoying anime and video games. Her work reflects her passion to anime and hopes to one day create an anime/manga of her own.

View all posts by April Violet →