Tis’ the season to be holly jolly and the season for catching up on TV. While the holidays can be a hectic time of the year, it’s a good idea to take some time to relax. I always like to seek out live-action adaptations of manga and anime that I’ve enjoyed in the past. While live-action shows can be a hit or miss, you can’t deny your curiosity in seeing how the source material will be adapted. Here are some notable live-action adaptation Japanese dramas that I’ve enjoyed and that you should add to your TV watchlist.

This show follows four handsome fifteen-year-old friends who are allowed to live in a gigantic house for free! The catch? That within three years the guys must transform the owner’s wallflower niece into a proper lady. This task is more difficult than it seems as Sunako Nakahara is an agoraphobic, horror movie-loving girl who shies away from everyone. Though this story sounds superficial, it’s a positive story about beauty being skin deep. At first, she starts off in the story as super standoffish, but we learn that underneath all those layers that she’s a very kind-hearted person. It was so entertaining to read Sunako’s interactions with the boys and how they all become good friends.

I’m a huge Aya Omasa and Kazuya Kamenashi fan. They shine in all of the J-Dramas that they act in and usually do a good job of acting in dramas based on anime and manga. They really sell it as the lead roles of Sunako and Kyohei and they have nice on-screen chemistry. It’s an entertaining show and I like how the story tackles body image and self-love. It’s also very comedic with lots of action comedy and witty banter. It’s a fun, light-hearted show that fans of the original manga can enjoy. 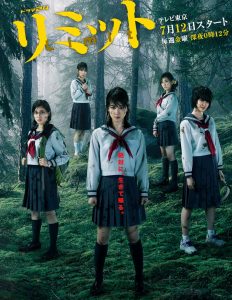 For a more suspenseful and thrilling live-action adaptation, try Limit. This J-Drama based off the manga follows the story of a high school with a focus on one particular, turbulent classroom. Konno, our main character played by Nanami Sakuraba, is a high school student. She belongs to the most powerful group in the class, led by Sakura Himezawa, so she can have a peaceful school life. One day, on the way to a school exchange event, a school bus driver dies due to overwork. The bus goes off a cliff and so begins the story of survival. Immediately when watching this J-Drama I thought of the classic novel, Lord of the Flies by William Golding. Left alone in the woods they must fend for themselves and work together to stay alive. On top of everything, all the girls are from different cliques which brings up tensions, but in this situation, survival is what is important.

We follow the final five survivors and learn more about each character through flashbacks. We see how they were perceived, their personalities, social status, and instances of bullying, which all end up playing a part in their survival. I found this adaptation to be just as gritty, dark, and violent as the manga. The actresses that play the five survivors draw you in as they try to survive in a harrowing situation. Viewers are put on edge as you aren’t sure who to trust and the circumstances are constantly changing. Full of thrills and plot twists, this show will have you on the edge of your seat. 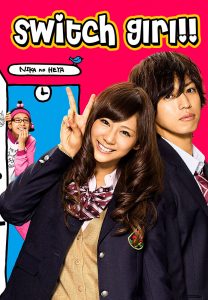 This romantic comedy revolves around the story of a high school student named Nika who appears to be a stylish and fashionable girl at school, but that’s really a fake persona that she uses when she’s in public. At home, she “switches off” the facade and returns to her true slovenly nature. I think this is one of the funniest and most outlandish J-Dramas that I’ve watched. There are so many wacky antics that occur, over-the-top dream sequences, and a lot of slapstick comedy which adds to the overall viewer experience. Nika has her moments where she randomly goes into a switch-off moment in public or acts overdramatically to add to the manga effect. I liked that instead of a mean girl persona, Nika is a sweet person who just likes to be her true self in the secrecy of her house.

What makes this show such a joy to watch is seeing the main actress, Nishiuchi Mariya in action as Nika. She plays the character well and I like her chemistry with the cast. The classroom rivalries are funny and the allure of Nika trying to keep her secret pulls the viewer in. 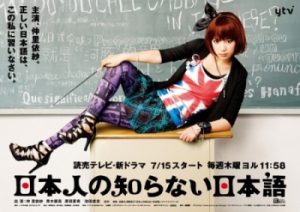 As a person who studies the Japanese language, this show was so interesting! Our main character, Kano Haruko, is a charismatic shop assistant who has such excellent fashion sense that she has been featured in fashion magazines. However, she is unable to give up her dream of being a high school teacher. Haruko is asked by her former teacher to teach Japanese to foreigners for three months on the understanding that he would recommend her for the high school’s Japanese language teaching position. And so she becomes a trainee teacher at a Japanese language school where she coaches nine foreign students with strong personalities.

I learned a lot about the Japanese language from watching this show and others that are interested in learning Japanese might want to tune in too. It’s entertaining while also teaching you about subtle nuances in the Japanese language. It’s so much fun because the students have these very vibrant personalities that can sometimes clash during class and overpower Haruko as a teacher. Her way of teaching is not always conventional, but it sure makes class enjoyable. 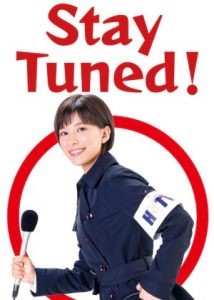 Hanako (Kyoko Yoshine) is a rookie reporter at a local TV station in Sapporo. She keeps making mistakes at work, but they somehow turn out to become scoops or touching stories. While Hanako makes mistakes, people around her get involved in the commotions caused by her. This five-episode J-Drama is based on a manga series of the same name. It’s a fun short series where the characters really shine! It’s also informative as it gives viewers a behind-the-scenes look at broadcasting and all the departments that work on making the daily news! It’s a fast watch, but a show that will have you rooting for the main character to excel at her job and become the best reporter she can possibly be!