The Razor Crest is still in terrible shape and there is no way the Child and The Mandalorian are going to make it to Corvus like this. They limp their way to Nevarro.  The first thing we get to see is Cara Dune (Gina Carano) is still there and she easily takes care of some Aqualish criminals. She then appears again to greet the Razor Crest with Greef Karga (Carl Weathers). It’s all smiles as they are happy to see each other again. Greef is extremely happy to see the Child. He tells his crew to repair his ship and tells The Mandalorian they are the best as the camera focuses on one crew member. 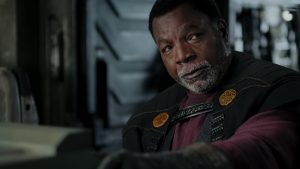 The town destroyed at the end of season one is fully refurbished and thriving. Cara Dune is Marshal and Greef Karga still seems to be running things. Keep your eyes out for a cool tribute to a lost hero. The building where they had one of their final showdowns in the season 1 finale is now a school. You hear some familiar names in the lecture being given by a 3PO teacher droid (Kathryn Elise Drexler.) Akkadese Malestro, Corellian Run, and Hydian Way. The Mandalorian is hesitant to leave the Child in the classroom (but not with every other babysitter?), but there is business to attend to and Karga and Dune need our hero’s help. Who Doesn’t? There is some interaction to enjoy between one student and the Child. Mostly because this kid cannot stop eating.

Next, we are greeted by Mythrol (Horatio Sanz) who you may remember from the very first episode. He was the first bounty we saw. Nervousness sets in when he sees The Mandalorian, but Mando is not here for him. Karga has a mission for his old employee. There is an old Imperial Base that he wants gone. He no longer wants any sign of the Empire ever being on Navarro. There is heavy weaponry involved and everyone is going. Even Mythrol. Even if he does not want to. He is indebted to Greef Karga for 350 years and this is the best way for him to work off that time.

Arriving at the base, they see the door is malfunctioning and need the Flash Cutter to break their way in. The Mandalorian has no time for that as he flies up to the top of the base and tosses off one of many dead stormtroopers. Karga, Dune, and Mythrol all make their way in to see that The Mandalorian has already laid waste to more troopers. There is a Trexter Marauder that Mythrol fawns over for black market reasons, but it will come in handy soon. After eluding more troopers, knocking out security, and acquiring a handy Code Cylinder, the team sets in motion events that will turn that base to rubble in ten minutes. 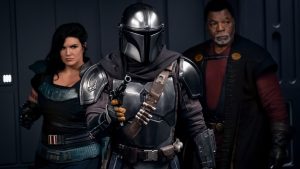 Planning to make a quick and painless escape, the team discovers that this place is really a lab. They observe test subjects and reveal a recording sent to Moff Gideon from Dr. Pershing (Omid Abtahi) talking about “M-count” and the transfusion rejection from the Child. They still need to run more tests. They still need the Child. The Mandalorian blasts his way through many more Stormtroopers and jetpacks out of there to get back to the Child as quickly as he can. Go Papa Mando!

Now it’s time to get out and the firefight is on. With only ten minutes before everything blows up, it’s a mad dash to escape. However, they are met with a barrage of Stormtroopers and time is running out! So, Cara takes charge and revs up the Trexter Marauder to deal with the onslaught of attacks and make it off the base in time. But so do some troopers on Speederbikes as they start to give chase and Greef mans the gun and handles them. Only now they must deal with TIE fighters. Greef Karga tries to shoot them down but the Marauder is no match.  Cara Dune pushes the Marauder as fast as it can go, trying to just make it to town when hope from above comes in. The Razor Crest is seen blowing TIE fighters out of the sky. The Mandalorian once again saves the day and goes on with his mission with barely a goodbye. The New Republic comes to question Cara and Greef, but they keep their mouths shut. The spy does reveal himself in a message to Moff Gideon. When we see Gideon he seems to be in a room surrounded by Dark Troopers. This is just one of the many Easter eggs for the nerds to enjoy or dissect until the adventure continues in the next episode. 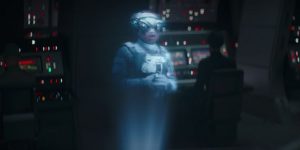 Let me just start this by saying that at the end of every new episode it is exciting to see who the director is. This week I was not let down as an actor I have enjoyed all my life took the helm on this one. Carl Weathers got his shot at directing for this one and I have to say: he did a great job!  Not the best episode this season but it was certainly action-packed. You can tell he is a fan. I mean if I were directing anything Star Wars, I would want Speederbikes and TIE fighters as well.  I think he might really love The Child. In the opening, there is a cute scene where The Child plays little mechanic in a tight space for the Razor Crest. Cute comedy takes place there with cute smiles and again in the classroom. Where also I FINALLY got to see the Child use the force again. This made me quite happy. He stole a snack. It was so adorable.  I do think Cara Dune was more aggressive and commanding the last time we saw her. I am not sure if it is how they are writing her character now. I just enjoy the take no crap and kick more ass Cara Dune. The weird thing though is that Carl Weathers seemed off for this episode and I can only assume he was super nervous about being a director in the world of Star Wars. I do hope we see more of this little team on Nevarro. Even more, I want The Mandalorian to stay on mission. Find the Jedi. Enough side missions. It is just like side dishes. Eventually, we need the main course. We are hungry! Let us eat!