Can I be frank for just one little second here… No, wait, strike that. I don’t want to be Frank, because someone named Frank actually might be responsible for this какашка (Russian for turd!). Or maybe his name was Steve, or Jim, or heck,  maybe even Ivan the Terrible for all we know. The point is, there is a Police Academy Семь and it came straight to VHS in 1994, the same year we were all fixated on O.J. Simpson playing Nordberg again in The Naked Gun 33⅓: The Final Insult (I know, you thought I was going to bring up the Белый Бронко running down the 405). There are many, many questions to ask when it comes to the seventh installment of this franchise which, let’s be honest, ran out of bullets maybe around 4 or 5 (Police Academy 6: City Under Siege is a wonderful live-action Looney Tunes and should be awarded the Medal of Bravery!), least of all WHY? WHY? WHY? However, given recent global circumstances, I felt it was due time to revisit this little chocolate salami which offers everything from Callahan singing on the piano to Harris getting разозлился on by a dog to a complete rip off of The Three Stooges via a Russian acrobat group bouncing off the walls!

We must begin by addressing the розовый слон not in the room, and that’s everybody not returning. G.W. Bailey’s militant  Harris, David Graf’s gun-obsessed Tackelbarry, Michael Winslow’s noisy Jones, Leslie Easterbrook’s lethally blonde Callahan, and George Gaynes’ imbecilic Lessard are the only characters to come back for this round and I have to say it feels like a puzzle missing a few pieces to fully appreciate the idea of the picturesque scenery. We are missing Bubba Smith’s powerhouse HighTower, Marion Ramsey’s silent but deadly Hooks, Lance Kinsey’s butt kissing doofus Proctor, and, as always, Steve Guttenberg’s impishly playboy Mahoney (I would even settle for suave Matt McCoy’s Mahoney 2.0). The team does their best with what they are given, but sometimes the good ol’ American spirit cannot salvage everything. 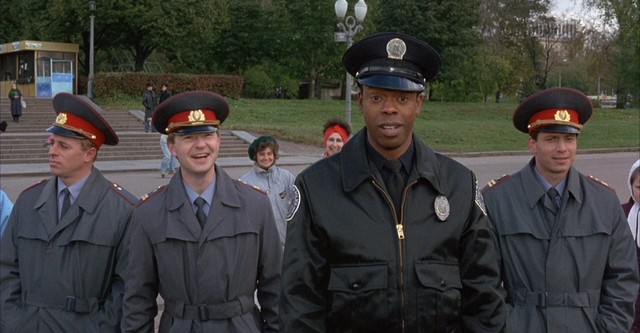 Filmed five years after #6 and coming in what seems like an вечность at 83 minutes, the film involves Russian mafia boss Ron Perlman (wasting his talents here) who is good at avoiding being caught by Russian police chief Christopher Lee (who worked on the film for one day, it appears). Naturally, they turn to the great heroes of the Police Academy for help! What Rocky Balboa, Ronny Regan, and Bullwinkle couldn’t do to stop the cold war, you can bet all of the Рубль in the land funny voices, fake mustaches, and grown men dressed as woman ballerinas will.  If you really can’t figure out where the rest of the movie goes, then you might need a refresher course by watching 1 through 6 again on Laserdisc (you can avoid Police Academy 4: Citizens on Patrol, to be honest though). For the sake of saying, Russia should be grateful America bestowed one of our greatest commodity franchises to be one of the only Western films to ever lens outside the Кремль.

Directed by Alan Meter (who gave us such classics as The Winds of Whoopie and Billboard Dad) this final installment (not including the ill-fated live-action series and the classic cartoon series, which had some amazing, if yet dated, action figures) was not the best send-off, yet did the best it could, given the limitations. It does have a great one sheet (they all do, and admit you always wanted a framed one in your bathroom), and if you are a fan of the series (who isn’t?) you do get enough laughs, but they could have benefited from a Bobcat or even a Sweetchuck! So protect and serve your couch, warm up a lukewarm пластина of Brocht with a side of Syrniki, and enjoy this final mission in cop comedy franchise heaven. Also, maybe the team can head back and help Ukraine this time around! #StandWithUkraine!