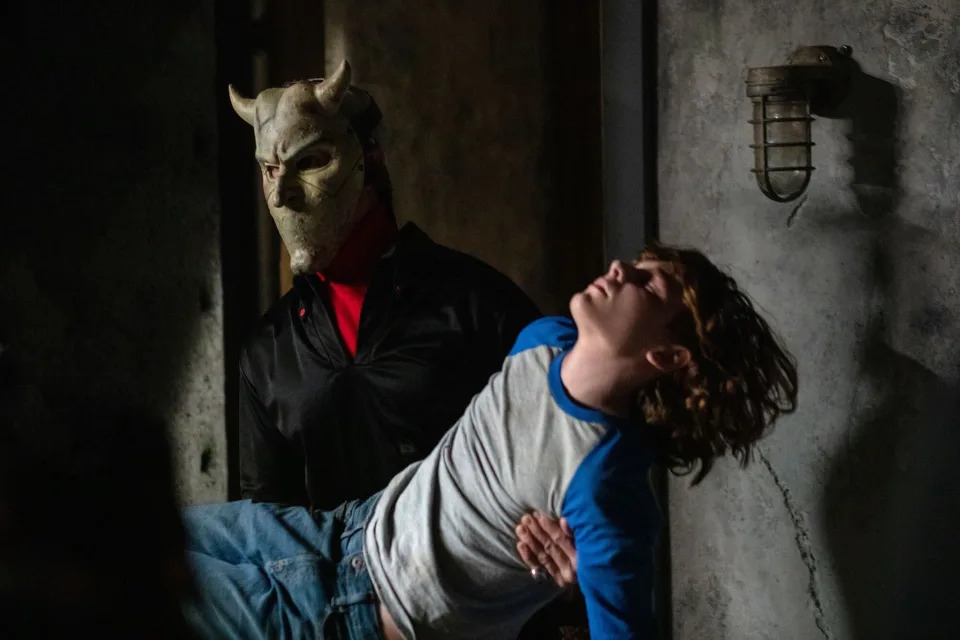 The phone is dead. And it’s ringing.

Universal and Blumhouse have released a brand new trailer for the upcoming horror release The Black Phone.

Director Scott Derrickson (Doctor Strange, The Exorcism of Emily Rose) reunites with four-time Oscar nominee Ethan Hawke in what could be one of the most unsettling and terrifying films of the year. The pair previously collaborated on 2012’s chilling horror film, Sinister. A movie that for many ranks up with the scariest releases in years.

And from what we’ve seen so far, this latest collaboration could easily have audiences scurrying for the pillows once again!

Hawke plays the Grabber, the film’s villain, a part-time magician responsible for a string of child abductions in a suburban Colorado town.

This latest look at the film gives us a closer look at Finney’s horrifying predicament and showcases several new shots of Hawke’s creepy mask – designed by the legendary Tom Savini.

Hawke has previously spoken about his role in the film and has teased his desire to play more villainous roles in the future.

“Scott wanted me to do a part in a mask for an entire film, and all of a sudden I feel like I’m doing Greek drama; he allowed me to give a performance in the middle of a horror movie. There’s a great Bob Dylan line in that Scorsese doc [Rolling Thunder Revue] where he says that if somebody’s got a mask on, you know they’re telling the truth — and if they don’t have a mask on, you know they’re lying. That was on top of my brain; the scariest thing about [the Grabber] is that he doesn’t want you to see him.

I’ve always had this theory that when you teach an audience how to see the demon inside you, they don’t unsee it for the rest of your career. Jack Nicholson can be playing an accountant and you’re still waiting for him to explode like he did in The Shining. But I realized I’m on the other side of 50 and it’s time to put a new tool in the tool kit. Villains might be my future.”

The Black Phone co-stars Mason Thames – in his first film role ever – alongside Madeleine McGraw, Jeremy Davies, and James Ransone.

Scott Derrickson and C. Robert Cargill wrote the screenplay which is based on the award-winning short story by Joe Hill from his New York Times bestseller 20th Century Ghosts.

The Black Phone arrives in theatres on June 24th.