You just can’t keep William Shatner from space! The screen icon, known for his role as Captain Kirk in Star Trek, not only acted as if he was in space–he actually went to space! The actor now finds himself exploring another world. 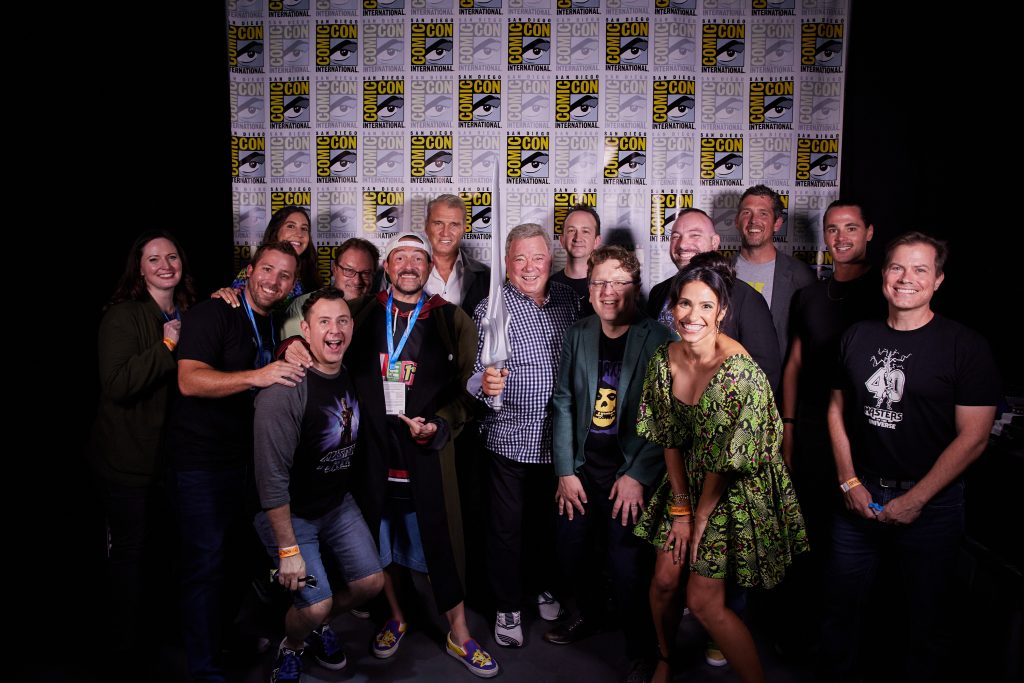 Mattel held a Masters of the Universe (MOTU) 40th Anniversary Fan Panel at this year’s SDCC with writer/director, Kevin Smith as the moderator. Fans were expecting to hear the latest news for Netflix’s Masters of the Universe: Revolution, a series created by Smith. However, fans were starstruck when Willam Shatner suddenly beamed to the stage and announced his appearance in the upcoming season!

Smith and Shatner joked about his involvement with Revolution, while still keeping his character a secret. Kevin spoke about working with William and how he ended up directing him! The audience went wild. Shatner responded, “Kevin, in a moment, you will have the honor of directing me.” Smith retorted to an enthusiastic audience, “It took Captain Kirk to shut up Silent Bob.”

Kevin Smith also interviewed some of the greats from MOTU’s history, including talent and creators from each era, spanning Toys, Film, TV, and Publishing. Fans got a sneak peek at what’s to come with talent, including Kevin Smith, Dolph Lundgren, Tiffany Smith, Rob David, and Pixel Dan.

Take a look at the trailer shown during San Diego Comic-Con.

Everything has led to this- the final war as He-Man and the other Masters must stop Skeletor from spreading havoc and save the cosmos! Don’t miss the epic conclusion of He-Man and the Masters of the Universe when season 3 is available on Netflix on 8/18!

The Masters of the Universe is a part of Netflix After School. A dedicated channel, where kids & kids at heart can discover fun new shows and movies and dive deeper into the stuff they already love — from Jurassic World Camp Cretaceous to Cuphead and everything in between.

Are you excited to see William Shatner join He-Man? What’s your favorite of the long-time franchise? Sound off in the comments below.