The month of October is considered the scariest month of the year and New Jersey Horror Con and Film Festival is adding to the thrills. From October 11th to the 13th, they’ll be hosting stars from many of your favorite horror films at the Showboat in Atlantic City, NJ.

Among the guests are Charlie Sheen, who appeared in Scary Movie 3 as well as movies such as Platoon, Hot Shots, Major League and starred in the hit television show Two and a Half Men. Christina Ricci has a lot of horror experience with roles in Cursed, The Addams Family, Casper and Sleepy Hollow, to name a few. There are stars from Nightmare on Elm Street, Halloween and American Mary, plus cast members from Police Academy, Spaceballs and more! 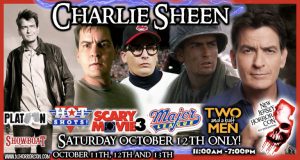 Media conventions, such as this one, allow fans to meet actors they’d previously only seen on a movie screen or on television. This convention will also feature panels, where the stars will answer fan questions and talk about their careers and projects.

Guests will be available for autographs and photos throughout the weekend. (Some guests may not attend all three days. Please visit the website for more information.)

But there is more for horror fans, with merchandise from scores of vendors and artists. This includes hard to find items, custom made items and artwork that you can’t find anywhere else. Whether you are a die-hard collector or just want something special to showcase the fandom you love, there are plenty of items to choose from. 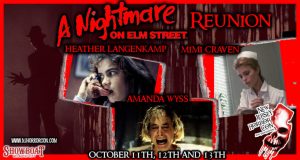 Horror films will also be screened and certain ones may include introductions by the filmmakers. Some of these screenings may require an additional ticket.

However, the best part of any convention is usually the fans themselves. Attendees will be surrounded by others who share the same passion for horror as they do. Plus, cosplay is encouraged and there will be some cosplayer guests present as well to scare and delight people. (Please visit the website for cosplay guidelines and restrictions.)