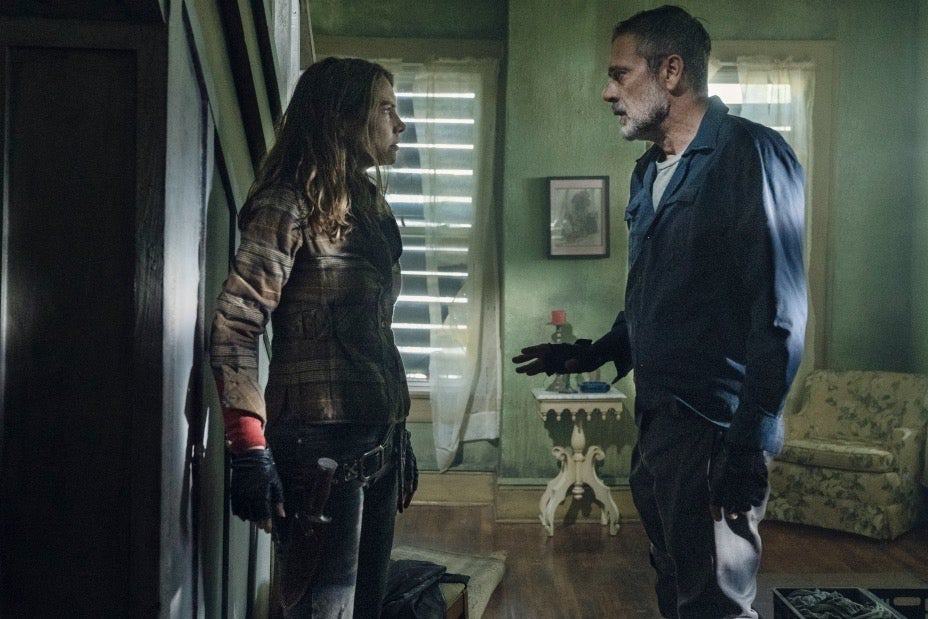 The complicated Maggie and Negan relationship will continue in Isle of The Dead and more details about the Walking Dead spinoff have been revealed.

Announced back in March, the series will see Lauren Cohan and Jeffrey Dean Morgan reprise their roles as Maggie and Negan.

In the six-episode first season of Isle of the Dead, Maggie and Negan travel into a post-apocalyptic Manhattan long ago cut off from the mainland. The city is filled with the dead and denizens who have made New York City their own world full of anarchy, danger, beauty, and terror.

Speaking on the Talking Dead’s: Walking Dead Preview special, The Walking Dead’s Chief Content Officer Scott M. Gimple spoke more about the series, revealing that it will be set in a “crumbling and chaotic” New York City with its own cultures and warring factions.

“It’s a madhouse, and [Maggie and Negan] enter it and get swept up into the madhouse. There’s a lot of conflict. There’s a lot of action. There are zip lines, the walkers are insane. The rats in that city are insane. Eli Jorné is the showrunner, and they’re doing incredible work over there right now.”

Dan McDermott, president of entertainment and AMC Studios for AMC Networks, has added his thoughts on the series, saying:

“It’s going to take place on the island of Manhattan, which was left to the walkers 12 years ago when they overran Manhattan. The government decided to blow all the bridges and tunnels and just leave the island to the walkers. And it’s now 12 years later. There’s a million-walker herd that’s sort of dominating the streets of Manhattan… Maggie and Negan have to journey onto the island, where there’s a small civilian [faction] that lives in Manhattan … above the 10th floor of all the buildings, and they zipline back and forth above the streets.”

Isle of The Dead is one of multiple Walking Dead spinoffs set for 2023. Andrew Lincoln and Danai Gurira will reunite as Rick and Michonne in a new series that will conclude their story, while Norman Reedus will return as Daryl Dixon as the franchise moves to France.