Content Warning: In this episode, the subject of rape is discussed. 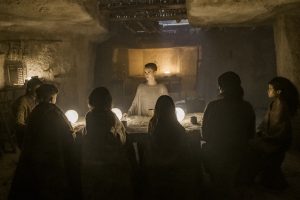 Episode 2 of Raised by Wolves starts very differently from the premiere episode. We start this episode off on a war-torn and grey Earth. There are destroyed buildings, debris covering the streets, tattered cars, and the only light is enemy fire. A female and a male soldier are seen running through the chaos to a tank-like vehicle. There is a damaged android hanging on the side, asking for help.

The pair oblige and hide inside what looks like an abandoned warehouse. They discover that the android is a Mithraic (the religious folk) A-Class droid with information of a family heading to an ark that will be arriving soon.  That family includes Marcus (Travis Fimmel) and his wife. Since the android is A-Class, he can perform cosmetic surgery. The couple decides to change their faces to look like Marcus and his wife to get aboard the ark- which the android seemingly does in a matter of minutes! This scene also reveals to the audience that the Marcus we know is a fake.

Fake Marcus and his fake wife go off to find the real family to get boarding keys for the ark and also to kill them. I couldn’t help but laugh at the scene because it reminded me of that meme where the two Spider-men are pointing at each other.  The fake couple finds out that the real couple has a son, Paul, and they are to be reunited with their son on the ark. Could this cause a problem for our imposters?

Lucky for them Paul doesn’t sense anything wrong and they happily board the ark. The happiness ends there because this is a memory fake Marcus is having. Marcus is wandering Kepler 22B, and by the looks of it, he’s barely surviving.

Over at the settlement, Mother takes out her robotic eyes and hides them. She replaces them with the eyes of a dead Mithraic knight. She also removes his heart and puts it inside of Father. Father is revived and very freaked out. Mother calms him down and tells him we need to get back to raising these kids. Father is confused. Last he remembered, they had one kid.

Meanwhile, Campion isn’t making a great impression on his new “family.” Hunter, Vita, Holly, Tempest, and Paul (yes, Marcus’s son) are scared of Mother. And for good reason too. They tell Campion she is a necromancer- a type of android that is used to kill. Father is a regular servant type droid, thus making him much weaker than Mother.

During “family” dinner, Mother takes away the children’s pentagram necklaces and lets them know there will be no religion in this house! Also, if they try to escape they will die from starvation or the cold. Way to set the mood. The children quickly realize that escaping will not work. They attempt to convince Campion he needs religion but he is unsure. He also learns that the kids are not exactly kids; they are much older but were in a cryo-sleep.

Mother, now in teacher mode, is teaching her new children about the universe in hopes to get them to denounce their faith. She tells them to remember what it was like before they were born. How the stars called to them. Tempest seems to be taking to the lesson more than others, and Mother notices. We also start hearing the sound of a heartbeat. Mother asks Tempest to come with her. The other children worry but Campion tells them she will be fine because he took care of “it.” 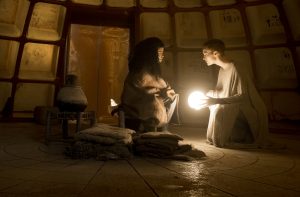 Mother takes Tempest to the orange igloo and tells Tempest she will only have to do house chores from now on, but now Tempest needs to rest. Tempest is pregnant but it is not the happy news Mother makes it out to be. Tempest was raped by a high-leveled celery member who woke up out of hibernation early. This disgusting man took advantage of the sleeping children thus resulting in her pregnancy. The man was sentenced to death but Mother killed him early. The young woman doesn’t want the baby but her religion says she must keep it. Mother knows this and preys on that, telling the girl “the baby is innocent.”

Father is outside working on his dad jokes (for real) and he sees a creature. They have been on Kepler for 12 years and have never seen any organic lifeforms. Father, not being programmed for fighting, tells Mother. They agree that she needs her eyes! The eyes aren’t where she hid them and the parents know it was Campion. Time is now of the essence as the creature is now creatures and they are after Tempest! The usually sweet Father is now yelling at Campion for the eyes and they fall out of his son’s pocket. Mother gets the eyes in the nick of time and kills the creatures with her necromancer powers.

Those were not the only creatures though. A sleeping Marcus gets bullied by these same creatures and they push him into a hole. Marcus doesn’t fall to his death, he has a rope attached to him, so he just dangles there. Last thing we see is more Mithraic knights find Marcus and help him up.

I enjoyed episode 2 a lot. However, it left me with many questions. Why the big reveal so early on in the series? Is this a hint to even bigger secrets in the series? What happened on Earth? Was there some kind of Holy War? What is the aging process like for humans living in arks? How are laws made when someone can look like a toddler but is an adult? Is the religion Sol different from Christianity? I also want to know about Mother & Father’s maker, Campion Senior. Did he know Mother would become out of control and did he program Father to tell jokes? Hopefully, we will get some answers in episode 3.

How are you enjoying the series so far? Do you have any theories? Share with us in the comments and on social media!