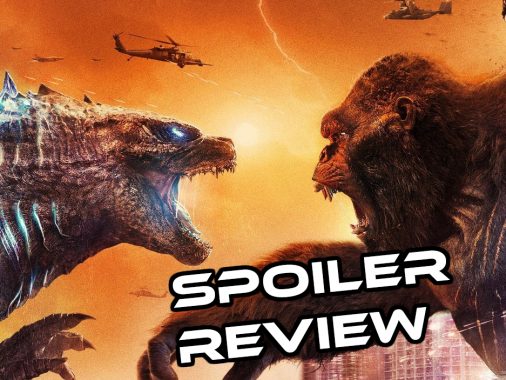 When I was a kid growing up in the 70s, there was nothing better than MONSTER WEEK on the 4:30 Movie on WABC Channel 7. Buried amongst those rubber-suited Kaiju cinematic masterpieces there was the ultimate in monster grudge matches. KING KONG VERSUS GODZILLA from 1962! This cheesy flick showcased the worst onscreen depiction of the legendary giant ape, King Kong, as a guy in an ill-fitting gorilla suit battled a guy in a rubber radioactive dinosaur suit.

As they fumbled and tumbled over cardboard and balsa wood miniature cities, I was mesmerized at the sheer gaudy grandeur of this celluloid confrontation. I contemplated the bigger question; What could ever compete with this epic film?

Fast forward nearly 50 years later, the answer to that question would arrive with Legendary Films’ latest release GODZILLA vs. KONG!

Due to the pandemic, GVK was delayed from its initial 2020 release, and arrived in the quiet comfort of my home on HBO Max. Would it compare to my cherished childhood cinematic classic? Well, let’s find out…

First, this is the fourth (possibly final) entry in the “new” modern monster series which began in 2014 with Godzilla, followed by Kong: Skull Island (2017), and Godzilla: King of the Monsters (2019). Godzilla, in previous films, was our Kaiju version of Clint Eastwood, arriving from out of the wild west- I mean the ocean depths, strolling into town – or rather stepping on it to save us all from the “bad” monsters. Meanwhile, Kong is just hanging out on Skull Island doing his best to be left alone. So what would bring these titans with bad tempers together? Why, mankind of course, because we are a bunch of jerks!

What follows is my attempt to boil down the “plot” of GVK.

Turns out that APEX, aka the “Bad Guys” wants to tap into an energy source that comes from the Hollow Earth. It seems the center of Earth is where our Titans (aka big monsters) come from, except Ghidorah (who was an extraterrestrial), and is the source of an immense power. Thanks to a crazy bleach drinking (before that became a thing) podcaster (Brian Tyree Henry) and his meddling teenage fans (Stranger Things’’ Millie Bobby Brown and Deadpool 2’s Julian Dennison), Apex is getting a monkey wrench thrown into their evil plans- which involve using the skull of Ghidorah to power their MechaGodzilla. Still with me?

Meanwhile back on Skull Island, Kong researcher Ilene Andrews (Rebecca Hall) and her adopted mute Skull Island native daughter, who can speak to Kong in sign language, are asked by a Monarch agent (Alexander Skarsgård) to go to Antarctica to explore the opening to the Hollow Earth.

Then Godzilla gets involved.

At this point, I would ask the writers to put down the bong and try to make sense of this story. I began to feel like I was watching one of those Michael Baty Transformers movies, where there is a ton of action but I sit there confused as hell. But who am I kidding, no one watching this movie cares about a plot! We just want to see things get smashed, blown up, and have Godzilla and Kong kick giant butt! Boy! Do they ever! On land, sea, and in the air, they destroy more prime real estate than any housing market crash ever did!

The film goes on with other nonsensical plot threads like other bad humans trying to stop Kong, but honestly, after two viewings, I still don’t know why or care. But it all comes to a rousing final act with a beat down of Kong in Hong Kong (no relation), and then the entry of MechaGodzilla!

Then this wacky movie has the audacity to become a monster buddy film, as Godzilla and Kong team-up to take down the man-made monster.

It all sounds crazy but somehow it works!

Godzilla vs. Kong is everything you want it to be- a nonstop, big screen wrestling match between a giant lizard and a humongous ape! At times I felt I was watching a big-screen adaptation of the PlayStation game War of the Monsters, with enough whiz-bang special effects to dazzle fans from ages 5 to 95. As much as I mock the muddled story, I do respect that it is littered with traditional Tojo tropes:  the little kid who can communicate with the monster, countless crushed cities, the reaction shots by Godzilla as he tries to earn his much-deserved Oscar nomination.

This movie throws everything but the kitchen sink into the mix- Kong finds a family, gets some sort of mystical battle-axe, has a near-death experience, and earns a budding bro-mantic partner at the end. Godzilla goes wild, destroys an insane amount of buildings, and still saves the day yet again! MechaGodzilla is a bad-ass Hot Toy or LEGO kit just waiting to happen! Mix all this up with ideas straight out of Ancient Aliens and you have one damn fine fun time at the movies.

GVK is big-screen Summer popcorn movie in early Spring. If it’s playing at an IMAX theatre, see it in all its giant-sized glory!

KING OF THE NERDS RATING: I give it 4/5 monster SMASHING stars!

Mitch Hallock is the creator/producer of TERRIFICON, CT’s #1 Comic Con and CTGAMERCON. He is cohost of the Power Cosmic podcast with Jerry Ordway, a news correspondent for The IndyCast podcast and TheRaider.net since 2007, cohost of Mitch & Ed’s Excellent Adventure and the “King of the Nerds” on the Chaz & AJ morning radio show since 2010.