Today we mourn the loss of one of television’s best and brightest, Luke Perry. After being admitted to the hospital for a massive stroke, Perry passed away March 4th at the early age of 52. 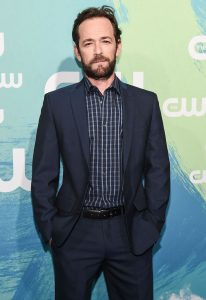 Luke burst onto the scene of television acting in the 1990’s as the star of the popular Beverly Hills 90210, playing Dylan McKay. This was the role that he became known for throughout much of his acting career, securing his place as a teen idol of the era. As the decades went on, Luke made appearances in many films and shows, including The Fifth Element, Buffy the Vampire Slayer, and Will & Grace.  He even spent some time on Broadway in the early 2000’s revival of The Rocky Horror Picture Show. Most recently, Luke starred in the CW series Riverdale as Fred Andrews, father of lead character Archie.

Luke was involved in this role at his passing and he will be missed by fans of the show and fellow cast members alike. He was known among his costars as a kind and generous man who stood up for the good of others. He died surrounded by family and friends, who have requested privacy and will not be releasing any further information at this time.

In a statement to CNN, the producers of Riverdale said:

“We are deeply saddened to learn today about the passing of Luke Perry. A beloved member of the Riverdale, Warner Bros. and CW family, Luke was everything you would hope he would be; an incredibly caring, consummate professional with a giant heart, and a true friend to all. A father figure and mentor to the show’s young cast, Luke was incredibly generous, and he infused the set with love and kindness. Our thoughts are with Luke’s family during this most difficult time.”

View all posts by Catherine Gordon →