Hello Fandom Fans! Welcome to our first roundup of the new year! 2021 seems to be starting off similarly to 2020, with most news centered on politics, but there are still several interesting fandom stories to share. Hopefully, these stories will provide you with a timeline cleanse.

Cruella and Amazing Spider-Man actress Emma Stone is expecting her first child. According to reports, Emma Stone was seen cradling a baby bump. This will also be the first child with her husband Dave McCary. No word on how far along the actress is or how this will affect her being in Marvel’s Spider-Man 3.  Congratulations to the happy couple! Just when you thought Hollywood had run out of ideas, they hit you with a crazy one. The classic puzzle toy, Rubik’s Cube, will get its own full-length feature film. The Rubik’s Feature Film will be produced by Amritraj and Executive Produced by Priya Amritraj and Addison Mehr for Hyde Park.


Star Wars: The High Republic are new stories from the galaxy far far away. These stories will focus on new characters with a few cameos from some old friends. In the all-new era of the glorious HIGH REPUBLIC, the noble and wise Jedi Knights must face a frightening threat to themselves, the galaxy, and to the Force itself.

Sonic The Hedgehog Movie May Include Knuckles

The surprise hit of 2020, Sonic the Hedgehog: The Movie, is already revving up for a sequel. Rumor has it that not only will Sonic be joined by pal Tails, but it looks like his rival Knuckles will join too. Knuckles is an echidna, who in the game has the ability to glide and climb up walls.

Step in Some Comfortable LEGOS

When you think soft, comfortable, stylish- you may not think of a LEGO first. Perhaps LEGO’s collaboration with Adidas will change your mind? ADIDAS x LEGO is a limited edition collection that features sneakers, clothes, and socks for fans of all ages. You can purchase this collection on Adidas’ website and other sneaker retailers.

His Dark Materials Will End With Season 3

HBO and BBC collab series, His Dark Materials, was renewed for its third and final season. The show is based on the Philip Pullman novels of the same name. Season three will have a total of eight episodes. The show is to begin production in Cardiff, Wales later in 2021. Season two of the series faced a number of challenges due to COVID-19. Is it possible that the virus is responsible for the show ending so soon?

That concludes the news roundup for this week. What story was your favorite? Leave us a comment below or online. Have a safe weekend. 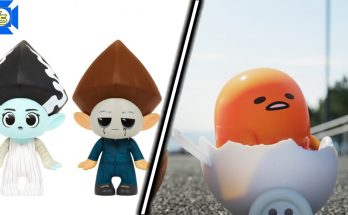