Netflix’s library of original movies continues to grow with German Action-Horror flick Blood Red Sky, the latest addition to the streaming platform. Blood Red Sky tells the story of a woman with a mysterious illness who is forced into action when a group of terrorists hijack an overnight transatlantic flight. Directed by Peter Thornarth and starring Peri Baumeister, Carl Anton Koch, Alexander Scheer, and Dominic Purcell, we follow the horrific situation that unfolds 30,000 feet in the air. What starts a hostage situation soon turns into something far more sinister.

The opening sequence wastes no time in ramping up the tension as we are thrown right into the flight’s final moments, from the perspective of those on the ground. Those who perceive this to be hostage negotiation, and look to resolve the issue without escalation, have no idea of the horror that truly lies on board, and neither do we. The scene creates a very unnerving feeling and sets the tone for the film moving forward.

Most of the runtime takes place in the confined, and claustrophobic aircraft which adds an intimate atmosphere to the horrific situation. Director, Peter Thornarth does a great job in replicating very real fears of flying and utilizes these to evoke emotions and add dread. Subtle touches in sound design and scene construction heighten the viewing experience.

The film is driven by committed performances from its cast. Peri Baumeister plays the role of Nadja with a real heart, as she deals with not only her illness, and maternal instincts, but with the savage beast that lies beneath. Her character has so much depth to it, and although her transformations into vampiric form are truly haunting, they don’t navigate into an all-out thirst for bloodlust – there is a strong inner conflict that drives her to fight the evil within.

Nadja’s son, Elias, is played by Carl Anton Koch and the bond between Mother and Son is handled well. Elias can be a frustrating figure at times but it has to be remembered that his instincts are those of a child who is trying to protect his mother (who is giving her all to protect him) – the “clever” decision goes out of the window when emotions are running this high. He is smart, witty, and courageous and the pair are very likable together, which really makes you root for them.

Rounding off the ensemble on board are the hijacking terrorists, lead by Dominic Purcell’s Berg. The hijacking of the flight is done well, as they very quickly take control of the situation. Ruthless, and unforgiving – the group establishes themselves early on as a dangerous foe, but Purcell’s leadership is overshadowed by the twisted and maniacal Eightball, played brilliantly by Alexander Scheer. Eightball is the true villain of this movie and really stands out from the rest of the group. (When even hijacking terrorists think you’re psychotic, you know there is something really wrong!). Scheer’s performance wouldn’t feel out of place in either a superhero flick or serial killer thriller, as he merges a pantomime-like villain with a ruthless murderer.

The cat and mouse game between Nadja and the hijackers serves as the film’s main narrative, and it plays out effectively. The film finds creative ways to keep flipping the momentum and keeps you guessing who really has the control. In other genre entries depicting vampires, there is an undefeatable, supernatural feel to the creature, which makes it near impossible to get an advantage, but Blood Red Sky adds real humanity to the mythology and brings with it some very real weaknesses. This allows the story to flow much better. 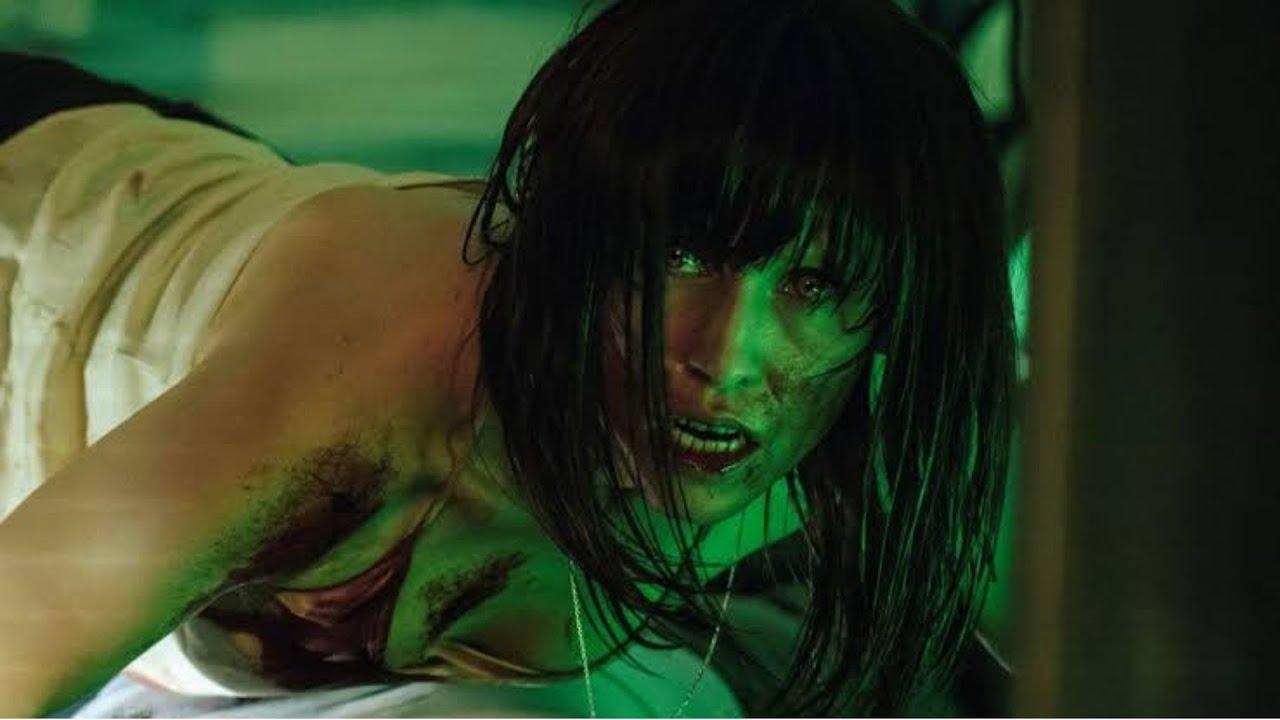 The creature designs are very impressive and add a real sense of horror to the film. Gone are the handsome, sexualized, enigmatic interpretations, replaced by a much more violent, visceral, and animalistic version. The way they move, look and sound is truly terrifying. This vision complements the film and works well with the genre-blending we see throughout.

Flashbacks to the origins of Nadja’s transformation are shown throughout, and although they do their job in fleshing out the character, they serve as a huge distraction to events in the current time. They serve as a real momentum-buster and take us out of the story at pivotal moments, which really disrupts the tension and horror we are experiencing.

Blood Red Sky is part hostage film, part creature feature, and works well as both for the majority. The film blends action and horror together well, and the intimate setting massively elevates the story. The blood flow is high, the tension is palpable, and the scares are strong – all of which combine well with a strong sense of charm and heart. But the runtime is inflated and flashbacks can become very unsatisfying, as there is a tighter, more effective film lying beneath. That been said, Blood Red Sky serves up another Netflix success which is better viewed in its original, undubbed format.

Blood Red Sky is now available to stream on Netflix. Check out the trailer below.