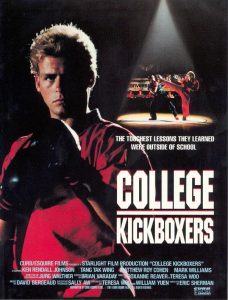 There are few moments in your life where a celebration is an expectation. The first time you kissed someone. The first time you get that job you always wanted. The first time you become a parent. The first time you try dollar store luncheon meat. All of these moments should be preserved by a keepsake from a Retrospekt® Polaroid 600 Close Up Instant Film Camera, but please make sure this handy device is ready for when you pop on the 1991 epic slice of celluloid tofu called College Kickboxers. Here’s mine: 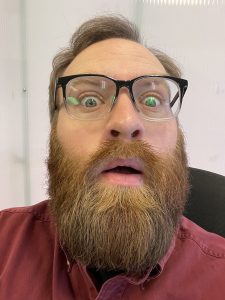 On behalf of the staff at Fandom Spotlite, I would like for you to watch this film and take a selfie immediately as the end credits roll and post this image in the comments section! I have a feeling we are all going to be lost in our euphoria of Ushiro Geri and our faces will match (hopefully most of you will have your head cocked to the left like our White Tiger villain).

I had the luxury, and honor, to watch this little gem with a bunch of the Fandom Spotlite staff and all I can say is watch this with your friends. Friends should be there for you in times of need and you will need them to get through this little finger death of fury. Often when you watch films with friends they will be riffing it like the great old days of MST3K (it’s Mike Nelson or go home!), yet as we were basking in the sunlight of this epic opus of undergraduate senpais, our voices were silent. Every so often a movie comes into your life and changes your view of the world. I thought the shadows on the wall were reality until I turned around and College Kickboxers (aka Trained to Fight, although we will NEVER refer to it as this title) is my new sensei on how to make great movies! 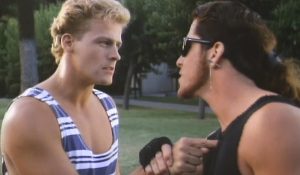 One of the only directing credits of Eric Sherman (who went on to produce classics like Pep Squad and Mystic Nights and Pirate Fights) This The Karate Kid/Kickboxer rip-off is an amazing hour and twenty-eight minutes of fistfights, head tilts, and dim-lit last rounds, worthy of any dorm set Kumite. The plot involves fifty-five-year-old actors who are playing freshmen in college. These Geritol-ridden men (with arthritis I’m sure) want to build a Dojo for youth to stay out of crime, but must fight to raise the funds. How can they be the best of the best? By being trained by the head chef at Wong’s Chinese Restaurant of course. Played by Tak-Wing Tang (who went on to do stunts in Jackie chan films Police Story 3: Super Cop and The Legend of Drunken Master), Chef Sifu Wing has the patience of Mr. Miyagi and the awesomeness of Snotty from Revenge of the Nerds II: Nerds in Paradise, and is the best part of the movie.

The movie hits every cliche rest stop you can think of and I LOVE IT! While watching this, we all agreed “Where the heck was this VHS when we were eight!?”  Yeah, the guys are always fighting and never go to class (I mean at all! They should be kicked out of school). Yeah, the villain delivers lines slower than John Wayne on cough medicine. Yeah, you can tell they turned off the lights during the end fight because they had no extras. So what? You rented a movie called College Kickboxers, you film snob gakuise! Just enjoy life, will ya! 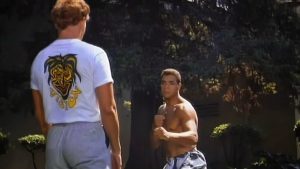 You can find College Kickboxers on streaming services like Tubi and YouTube, but it is hard to find on DVD. More often it is boxed together in four or ten packs of “Action Adventure Films” and I say Odoroku Bakari! So sit back, get your camera ready, and feast on your Uramaki gas station sushi while enjoying collegiate martial arts… you know, for kids!